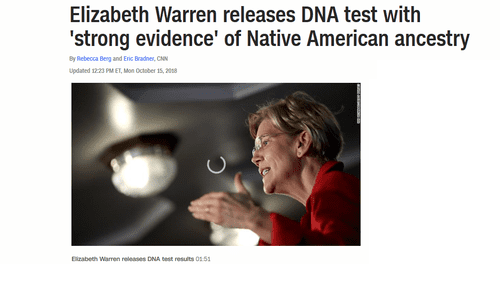 Senator Warren had her DNA analyzed not by the usual commercial testing services but by a Stanford professor, Carlos Bustamante, who writes:

(3) The total length of the 5 genetic segments identified as having Native American ancestry is 25.6 centiMorgans, and they span approximately 12,300,000 DNA bases. The average segment length is 5.8 centiMorgans. The total and average segment size suggest (via the method of moments) an unadmixed Native American ancestor in the pedigree at approximately 8 generations before the sample, although the actual number could be somewhat lower or higher (Gravel, 2012 and Huff et al., 2011).

Senator Warren has been claiming that her Cherokee ancestor was only five generations ago, which would have made her 1/32nd Indian. But her hired geneticist Prof. Bustamante concludes that that isn’t in the range of probability:

Conclusion. While the vast majority of the individual’s ancestry is European, the results strongly support the existence of an unadmixed Native American ancestor in the individual’s pedigree, likely in the range of 6-10 generations ago.

What this implies is that one of Senator Warren’s great-great-great-grandmothers was, most likely, about 1/8th American Indian but nobody in her family would ever let her forget it: Make sure that Great-Grandma only gets a glass of sarsaparilla and not any of the the corn likker, or she’ll go on the warpath, cuz you know how those redskins are.

As I explained in my Taki’s column “The Affirmative Action Honor System,” the affirmative action system doesn’t collapse into farce, the way it is doing in Brazil, because white Americans, with Senator Warren as a conspicuous exception, seldom try hard to exploit its ambiguities.

Senator Warren, for instance, claims that one of her 32 great-great-grandparents was a Cherokee or Delaware Indian (or both). Nor do most Americans have a pedigree as thoroughly documented as do thoroughbred racehorses, whose ancestors can sometimes be documented back to the 17th century.

To deal with this, American Indian nations each have their own rules for who is entitled to membership (and thus, in recent decades, who gets a share of the profits from the one casino each tribe has the right to own).

For example, the Cherokee require members to be directly descended from at least one person on the Dawes Final Rolls of 1907. Of the two tribes of Delaware Indians in Oklahoma, one uses a similar rule and the other requires applicants to be at least one-eighth Delaware by “blood quantum.”

Senator Warren qualifies under none of these measures. Yet, she did have herself listed as Native American at Harvard Law School, which used her assertion to statistically claim greater diversity of faculty. (Warren also contributed several old family recipes to a 1984 cookbook of American Indian cuisine entitled Pow Wow Chow, including that essential Plains Indian dish: crab with mayonnaise. This recipe may have been lifted from a 1979 newspaper column by a French chef who says this dish was a great favorite of legendary Indian chiefs Cole Porter and the Duchess of Windsor.)

Warren is a law professor from Oklahoma, so she surely knew that the Cherokee have a bright line system for determining who gets to call themselves a Cherokee and that she definitely didn’t qualify.

On the other hand, one could theoretically be descended from enough American Indian tribes without qualifying for membership in any single one that an outside observer might consider you to have a legitimate claim to be a generic Native American. But what level of descent that would require has never been established, and if it ever were, Senator Warren would be unlikely to meet it. (Just look at her.)

In any case, being part Indian has never been all that detrimental in American history. For example, Herbert Hoover’s vice president, Charles Curtis, grew up speaking Kaw. His Indian blood just added a touch of glamour to his résumé.

Well, at least we now know, according to the Democratic Party, that race not only exists, but the biological reality of race is extremely real.

I’m a population geneticist who has worked extensively on admixture, including the genetics of the Americas.

1. Carlos Bustamante is a world expert in exactly the area of admixture of indigenous genetics into the general population of the Americas. He may be a “hired geneticist” but you should believe his technical results. In this specific area he will be more reliable than the big commercial outfits.

2. A 5th generation “Cherokee” ancestor might easily be 50% White. Thus the actual Native American ancestor would be 6th generation. You can’t expect family lore at this remove to be exact.

The simplest conclusion is that Senator Warren has been telling the truth here. This issue should be dropped. A slim hope indeed.

Dr. Patterson was more or less the Cold War equivalent of Alan Turing at code-cracking for British intelligence. After the Cold War, which he played a not insignificant role in winning, he made his fortune at Renaissance Technologies, and now pursues a spectacular third career as the brains behind David Reich’s ancient DNA studies at the Broad Institute at Harvard.