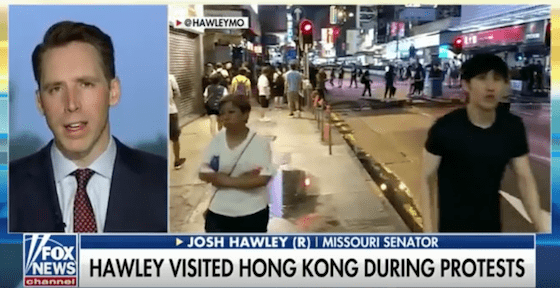 It’s nice to see a US Senator do some in-person investigation of a foreign trouble spot. Senator Josh Hawley recently spent some time in Hong Kong to see what was happening in the administrative district that has been battling a crackdown on its freedoms by Beijing. The Hong Kong people have been standing firm against the worsening violence from Red China forces in a weekly street confrontation that has been gaining intensity since starting in June. 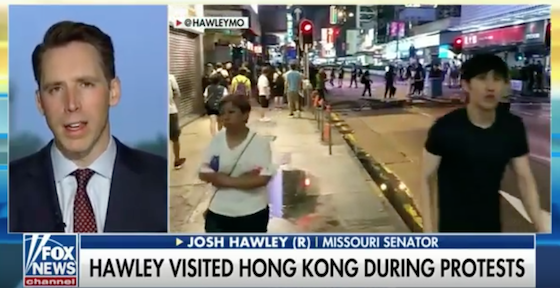 What’s disappointing is the weakness of wealthy Americans who fear some slight diminution of income from the communist power. As noted by Senator Hawley, Apple CEO Tim Cook will join the board of a Chinese university. Cook is worth over $600 million and doesn’t need to schmooze with the Red Chinese.

Since my blog NBA Embraces ChiCom Values of Suppressing Freedom, which included a look at the ingratitude of hoops star Lebron James to American freedoms, he had a curious temper tantrum about the US national anthem.

If this was the Chinese anthem @KingJames would have showed the proper respect https://t.co/a5yUyXo1dm

Here’s the interview with Senator Hawley:

BRIAN KILMEADE: Violent clashes continue between pro-democracy protesters and Hong Kong police as demonstrators took to the streets for the 20th straight weekend. Missouri Senator Josh Hawley recently went to Hong Kong to get a first-hand look at what’s happening there and joins us to discuss.

Senator, we see the protests taking place and no massive Tiananmen-Square-like crackdown. Does that mean they’re making progress?

SENATOR JOSH HAWLEY: Well I wish that were the case Brian, but in fact the government there in Hong Kong — which is not elected by the way, this is a pro-Beijing government essentially installed by Beijing — continues to suspend the right to protest.

They won’t grant protest permits; they’re using violent tactics, brutal tactics to disperse the protesters; they won’t submit to the right to vote. Hong Kong is becoming a police state, and that’s bad news for us because we know what China’s capable of. They’ve been ripping us off our jobs for years; this is bad news

KILMEADE : What can we do about it?

And we know what China wants to ultimately do is shut us out of the region and take away all of our jobs, our ability to trade.

KILMEADE: The NBA was a learning moment, wasn’t it? That was not just about basketball — it was about the power and arrogance and oppression. They think if they write the check and they have this market they could start telling us what to do on every level.

HAWLEY: Yeah exactly right and this is how Beijing plays ball — they tighten the screws and now they want to censor Americans. I mean the thing about the NBA is here they’re trying to tell Americans what we can and cannot say, and my word to the NBA is don’t become part of the Chinese Communist Party’s propaganda arm. Have a little independence; stand up for yourself.

Same message to Apple — quit cooperating with Beijing. I see Tim Cook now is gonna join the board of a Chinese state-run university. I hope he’s going to be teaching on human rights in Tiananmen Square. It’s time for some of these multinational corporations to get a little backbone.

KILMEADE: Absolutely and we gotta pressure, start embarrassing them by putting the spotlight on them and maybe people be too embarrassed to work for them.

Senator you also took a little umbrage at the fact that the Department of Agriculture was going to move out to Missouri to save some money, and guess how it was portrayed — as punishment. That bothers you.

HAWLEY: Yeah I mean listen — I’m grateful every single day to be a Missourian and it’s a wonderful place to live and to raise a family. To have these DC bureaucrats say that moving to Missouri is a form of punishment, that the only reason to do it is just to somehow get back at USDA employees — I mean that’s unbelievable. Look, if they don’t want to go to Missouri, that’s fine. They don’t have to work for USDA, but there are lots of folks in the Midwest, in the Kansas City region and all over my state who would love to have these jobs. Let them compete.

KILMEADE: And finally the USMCA — suddenly, Chad Pergram reporting this morning there’s been a slowdown; they might not have a vote on it. How is that possible? Both sides agree on just about everything.

HAWLEY: I’ve got two words for you — Nancy Pelosi — that’s how it’s possible. All of this is being held up by her: the Senate would pass it in a heartbeat. Nancy Pelosi won’t bring it to the floor and why, because it’s the impeachment circus full time, all the time over in the House. Nothing’s happening there, Brian, and the reason is they are hell-bent on impeaching this president. They’re willing to throw anything aside.

HAWLEY: You know, Canada and Mexico are our two largest trading partners in the state of Missouri this is a good deal for Missouri we need it

KILMEADE: The country needs it. You guys have suffered long enough because of this standoff especially with China. This is something we all agree on. It’s inexcusable if it doesn’t get passed or at least a vote. Senator, thanks so much for joining us.

Thanks for making that trip to Hong Kong because they’re flying American flags. We cannot look the other way.