Senator Feinstein Speeds to the Rescue of Deportees

There’s nothing like a tearful sob story to get attention, even at the highest echelons of power. Senator Dianne Feinstein (D-CA) swung into action after recently reading in the press that some Mexicans were being deported from her state:

Sen. Dianne Feinstein called Thursday for the federal government to reverse the deportation of an Oakland nurse and her husband, saying their removal after more than two decades in the country revealed the “cruel and arbitrary nature” of President Trump’s crackdown on illegal immigration.

Responding to a front-page Chronicle story about Maria Mendoza-Sanchez and Eusebio Sanchez — who plan to depart for Mexico on Tuesday with their 12-year-old son to start a new life, while leaving behind three older daughters who have legal status — Feinstein went to the family’s home for an afternoon meeting to discuss their plight. . .

On Friday, I reported on the case and its widespread news coverage in More Deportation Hooey: Trump the Family Splitter! But there’s lots more.

Senator Feinstein visited the family and discussed the case with the press. 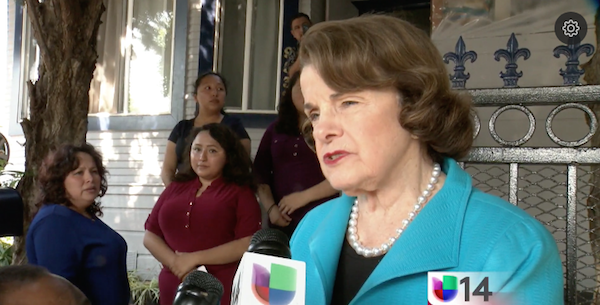 The California senator even had a supportive kiss for Maria Sanchez, the Mexican illegal alien! 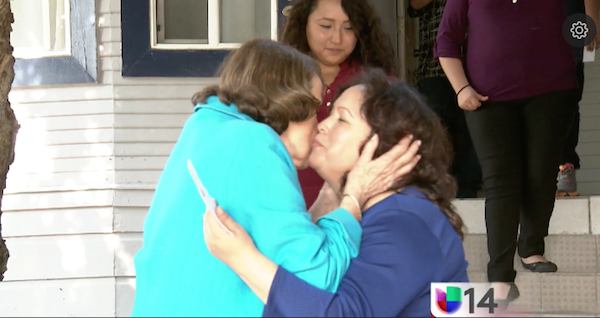 Does Feinstein not understand that illegal immigration is against the law and harms citizens whose jobs the aliens steal? She plans to introduce a private bill in the Senate to lift the deportation order.

Here’s a news report from ABC in San Francisco:

Feinstein even issued a press release to illustrate her concern. When was the last time she went to bat to protect an American??

Washington—Senator Dianne Feinstein (D-Calif.) today released the following statement on the case of the Sanchez family as detailed in the San Francisco Chronicle:

“The cruel and arbitrary nature of President Trump’s immigration enforcement policies is captured in the heartbreaking story of the Sanchez family.

“Maria and Eusebio Sanchez have lived in this country for more than 20 years. They are hardworking parents raising four children, three citizens and one protected by DACA. They have no criminal records. They pay taxes, own their home and contribute to this country. These are the kind of people we should welcome into the United States with open arms.

“Instead, the family has been notified that they must leave the country by Tuesday.

“Tearing this family apart doesn’t make anyone safer, it only places incredible hardship on their three children who will remain behind, forced to navigate their lives without their parents.

“This case exemplifies that it’s nearly impossible for undocumented immigrants to get right with the law when they want to do so. The Sanchez family has tried for two decades to obtain legal status.

“The deportation of Maria and Eusebio would be a loss for the Oakland community. The equities of their case should be given full consideration so that this family has an opportunity to stay together.”