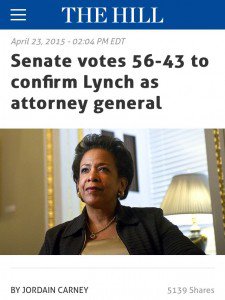 Loretta Lynch, also known as"Eric Holder Part II" has been confirmed with the votes of several Republicans.(You know, the party reelected with a majority because they told voters they'd fight Obamnesty.)

Here's the story from Politico, with emphasis and VDARE.com links added:

The Senate on Thursday confirmed Loretta Lynch for attorney general, clearing the way for her to become the first African-American woman to ever serve as the nation's top law enforcement official.

Senators voted 56-43 to confirm Lynch, more than 160 days after she was first nominated for the position by President Obama.