On Friday, Dennis Michael Lynch was a guest host on Newsmax TV. He is the independent filmmaker who has produced border documentaries like They Come to America II.

He interviewed Roy Beck (of NumbersUSA, the activist pro-sovereignty immigration organization) about the threat posed by Obama’s executive amnesty. 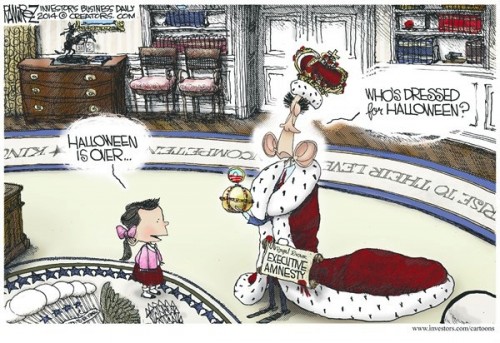 (Note: there is an annoying pause in the connection to Beck plus a couple of spots where the audio stream just drops off.)

In Part 1, Beck observes that a future President will find it hard to remove the work permits, once they are handed out:

ROY BECK: “If they are allowed to stay permanently, then there will almost immediately be probably about 20 million people in their home countries who will line up, who can see through chains of family connections that they can eventually get into America… Once their relatives are legal and permanent here, there’s a chain migration that goes on forever. So I’m saying at least 20 million lining up.”

Dennis Lynch next moved the conversation on to the more immediate affects on American citizen workers:

BECK: “Right now, illegal aliens — and there are about 7 million of the 11 million illegal aliens who are in the workforce in some way or another. But because they don’t have legal authorization, they are heavily working off the books in very low-wage jobs, they are not competing directly for the most part for payroll jobs. What this would do is immediately make it possible (audio drops off…) million Americans who want a full-time job and can’t find one. Eighteen million Americans and legal immigrants already here can’t find a full-time job.”

As has been noted here on various occasions, work permits are the real amnesty, not the “path to citizenship” that so enamors Democrat consultants; the actual foreigners come for the dollars and other goodies, not to vote. One example: only 40 percent of the 1986 amnesty cohort had naturalized by 2009.

Lynch then asked about construction work, which has been highly affected by illegal labor, and other employment categories. Do all Americans need to worry about millions of illegal aliens about to get work permits?

BECK: “The fact is, they are at every level. There are medical doctors who will be competing directly with American medical doctors, there are tech workers, and there are people as you say who are working as drivers, and people in construction, all up and down the line. There is no job, no occupation in America that won’t be affected by this.”

In Part 2, the conversation turned to another factor in illegal aliens occupying American jobs — remittances, the money sent home by job-thieving foreigners that is then spent in foreign nations, fueling their economies rather than ours.

BECK: “Yeah, the [remittance trend] will continue for quite some time, and you really hit on something important, and that is, this money first of all instead of going to Americans who need the money, who need the jobs and instead have to go on welfare, it’s going to the illegal aliens. And second, if it were going to the American workers, it would be recirculating in the economy. Instead, a good share of the money that’s going to the illegal aliens is going to other countries. So it’s a double whammy to the American people.”

The important upshot of this conversation is that American workers and unemployed persons will immediately face more competition for jobs and wages from Obama’s amnesty at a time when 18 million cannot find full-time work in the country’s jobless economic recovery, in which the middle class is actually shrinking.

Fewer human workers are needed for the rapidly automating economy, but the administration cares only about importing future big-government Democrats in the form of millions of Hispanics. The recent election showed how ineffective Democrat arguments are in convincing current citizens, so Obama is doubling down on importing a more compliant population, despite the fact that there are no jobs for the people here now.