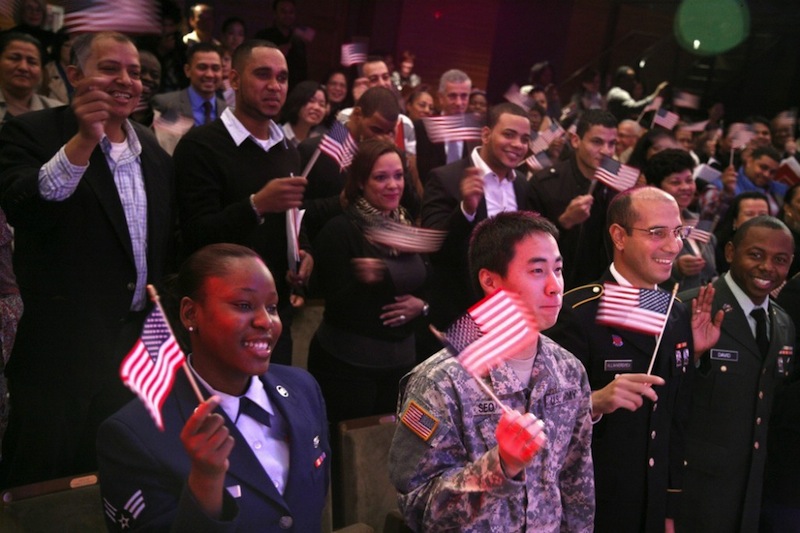 The Times adores immigration and diversity of the most extreme sorts without reservation, so it is curious to follow its mental gyrations describing legal immigrants who don’t want to become full-tilt American citizens. The paper notes that an estimated forty percent of green-card holders don’t become naturalized, so it’s not an insignificant number.

As good liberals, the Timesians naturally abhor the idea of civic responsibility, and green carders’ aversion to spurning their homeland tribe is similarly understandable. So the pretty picture of diverse new citizens is made more complex by the actual reality of foreigners who want to stay separate while gleaning all the goodies. The story hints that dual citizenship is a good idea since people aren’t required to declare their loyalties.

The excuses are toted up: citizenship is too expensive, learning even the tiny amount of English required is too hard and attachment to their own national identity continues. Some don’t value US membership because of politics—one says it’s not that “cool” any more.

Many don’t care because they get nearly the whole enchilada with a green card, namely access to most US jobs (civil service is not available) and other financial opportunities. The Times would never say immigrants come mostly for the money, but of course they do.

The paper wraps up the vexing challenges to its belief system with a little story about a colorful Briton who naturalized in order to vote for Obama. In the Times universe, the presence of the great Obama still solves all seeming contradictions.

Jonathan Wajskol, an Italian graphic designer who moved to the United States about three decades ago, has a life with the hallmarks of an immigrant success story: graduate studies at an American university; a successful international firm with partners in Milan and Beijing; and a residence in Greenwich Village that he shares with his wife and two children.

One thing he does not have, however, is American citizenship — and that is a deliberate choice. Mr. Wajskol has a green card, but he has never applied for citizenship and is not interested. His reasons, he said, go to the heart of his identity.

“I would feel that if I get the American citizenship, I would feel a little less Italian,” he explained. “I really don’t feel American.”

For many people around the world, a United States passport is a near-sacred goal, and given half a chance to get one, they would hungrily seize it. In Washington, the partisan debate over immigration has become mired, in part, over whether to provide a path to citizenship for the estimated 11 million undocumented immigrants in the United States.

But even as legions here and abroad pin their hopes on becoming American, and the country wrestles with emotionally fraught questions over who should have that right, there is a seemingly contradictory truth: that millions of people who are in the country legally, and stand on the threshold of citizenship, never take that next step.

According to some estimates, about 40 percent of all people who hold green cards, the gateway to citizenship, do not naturalize.

Of those, many may want to apply but are deterred by a variety of reasons, including the $680 application fee or the requirement that most applicants must prove they can read, write and speak basic English, immigrants’ advocates said. Some countries — including Japan, China and Iran — generally do not permit their citizens to acquire a second nationality, forcing a difficult choice.

But alongside those potential applicants, there is a vast population of green card holders who have everything they need to naturalize, including the language skills, money, sufficient time of residence in the United States, permission from their native countries and a clean criminal record. All they lack is the desire.

They simply do not want it — or want it enough — and cite various reasons, including an overriding patriotism for their native country, disaffection for the policies of the United States government, even simple fecklessness.

“So often in textbooks about immigration, the cover illustration is the naturalization ceremony with the American flag and a group of immigrants, highly diverse by race,” said Alan Hyde, a Rutgers University professor who teaches immigration law and was a co-author of a recent study about why some people do not naturalize. “So much that is written on immigration just assumes that they come, they assimilate, they get green cards and they naturalize.”

But, he added, a different reality exists for so many other immigrants — those who do not want to naturalize. “Most people don’t know it’s a distinctive feature of America,” Mr. Hyde said.

For Mr. Wajskol (pronounced VYE-skole), whose wife and children are American citizens, the question of naturalization bubbled up from time to time. He even filled out the paperwork, he said. But he never followed through.

“I don’t have an Italian name, so as it is, I have a slight identity crisis,” he said. “Being American would taint my Italianness a little bit more.”

If he has one misgiving about his position, he said, it would be that he cannot fully participate in the American electoral process. Only citizens have the right to vote in federal elections and in most local elections.

But aside from that, Mr. Wajskol said: “I really have everything that I need. I am treated pretty much just like a citizen.”

Lawful permanent residents are eligible to apply for naturalization after meeting certain requirements, including a minimum length of residency, which for most candidates is five years.

In the meantime, they have many of the same rights and obligations as citizens, including permission to work. They are also bound by largely the same tax rules.

But in addition to limited or no voting rights, lawful permanent residents cannot make their home in a foreign country or remain outside the United States for extended periods of time, except in specific circumstances. They are ineligible, in many cases, for Civil Service jobs and certain government assistance. They can sponsor fewer types of family members for visas than can citizens. And they can be deported for violating any of a wide variety of laws.

Still, none of these disadvantages has been enough to compel many lawful permanent residents to stand and take the oath of allegiance.

Xiaoning Wang, who was born in Beijing and moved to New York City in 1994, owns ChinaSprout, a company that distributes Chinese cultural and educational products. She has a green card yet no urge to naturalize.

“I love New York, I love the United States, I love everything here and the opportunity that I have in this country,” said Ms. Wang, who is married to a German and has German nationality. “I just don’t see the advantage” of being naturalized, she added.

The number of naturalizations in the United States has fluctuated in recent years. After reaching a record high of nearly 1.05 million in 2008, the number plunged to about 620,000 in 2010 but started climbing again, topping 757,000 last year, according to federal statistics.

Still, that number is a mere fraction of the total population eligible to apply for naturalization. Of the estimated 13.3 million green card holders living in the United States at the beginning of 2012, about 8.8 million were eligible to naturalize, according to a recent Homeland Security Department report.

A Homeland Security study in 2008 estimated that cumulative naturalization rates among lawful permanent residents who had held green cards at least 20 years was about 60 percent.

Guy McLeod and his wife are British citizens and have two American-born children but no plans to naturalize. Like Mr. Wajskol, Mr. McLeod cited reasons involving national identity.

“Ultimately we’re European,” explained Mr. McLeod, an employment recruiter who lives with his family in Rhode Island. “If you were an American going to Europe and you weren’t an economic refugee or a political refugee, why would you suddenly say, ‘I’m going to become a Frenchman’?”

But sometimes the reasoning for shunning citizenship is not particularly existential. Carla Greeb, a Brazilian citizen who moved to the United States in 2000, said the process of getting her green card was so arduous — it took three years — that she never again wants to set foot in 26 Federal Plaza, the Manhattan office of United States Citizenship and Immigration Services.

“I don’t want to go back there for my whole life!” she exclaimed. “I got traumatized!”

Alain De Beaufort, a Colombian with a green card, moved to the United States six years ago and married an American; they now have two American-born children and live in Brooklyn.

For a while, he said, laziness thwarted any vague interest in naturalizing. But his ennui has given way to a more profound reason: a growing disillusionment with the United States, particularly its foreign policy.

When he was growing up in Latin America, the United States and the idea of American citizenship were very attractive, he said. But in recent years, he said, he has opposed aspects of American foreign policy, including practices at the Guantánamo detention center and the expanded use of drones for targeted strikes. As a result, his view of the country has shifted.

“It’s not as glamorous to be a U.S. citizen anymore,” said Mr. De Beaufort, a writer and restaurant server. “It doesn’t seem to be that cool anymore.”

But Mr. De Beaufort allowed that the conveniences of citizenship might eventually trump his idealism. Indeed, while the people who naturalized in 2012 spent a median of seven years with a green card before naturalizing, according to the federal government, some waited much longer.

And from time to time even the most stalwart nationalists from other countries can find their positions crumble overnight.

Claudine Moore, who was born and raised in Britain and moved to the United States in 1999, said that for years, much as she enjoyed living in this country, she had no interest in becoming an American citizen. “I’m very much attached to my Britishness and my love and pride in being British,” explained Ms. Moore, founder of C. Moore Media, an international public relations firm based in New York.

But as Barack Obama began to emerge as a possible candidate for the Democratic nomination in the 2008 presidential campaign, she changed her mind and applied to naturalize — just to vote for him.

Her sister, who is married to an American citizen, was moved to do the same thing. “Her husband didn’t persuade her,” Ms. Moore said, “but the prospect of a black president did!”