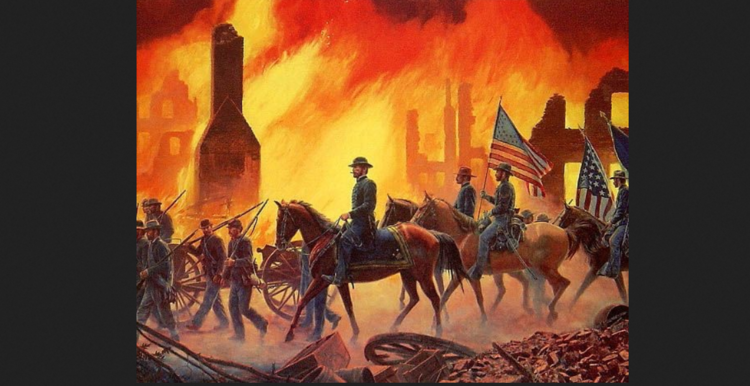 The New York Times has contrasting pieces on the Burning of Atlanta 150 years ago and William Tecumseh Sherman’s subsequent fiery March to the Sea:

In a news article, Alan Blinder informs Southerners that your family stories are fictitious and, besides, you had it coming:

150 Years Later, Wrestling With a Revised View of Sherman’s March

Historians have increasingly written that Sherman’s plan for the systematic obliteration in late 1864 of the South’s war machine, including its transportation network and factories, was destructive but not gratuitously destructive. Instead, those experts contend, the strategy was an effective and legal application of the general’s authority and the hard-edged masterstroke necessary to break the Confederacy.

They have described plenty of family accounts of cruelty as nothing more than fables that unfairly mar Sherman’s reputation.

At 7 a.m. on Nov. 16, 1864, Maj. Gen. William T. Sherman accompanied the last corps of his Union army as it left Atlanta to begin a virtually uncontested “March to the Sea,” which would end in Savannah five weeks later. Three miles outside the city, he stopped for a final look back. “Behind us lay Atlanta smoldering and in ruins, the black smoke rising high in the air and hanging like a pall over the ruined city,” he recalled. Presently a nearby infantry band struck up John Brown’s anthem. “Never … have I heard the chorus of ‘Glory! Glory! Hallelujah!’ done with more spirit.” The men were proud of what they had done.

Eventually, Sherman’s soldiers had little wish to write about the events of the first half of November 1864, because there was little to inspire pride. Sherman wrote almost nothing about Atlanta’s Nov. 15-16 blaze in his memoirs (beyond claiming that “the great majority of dwellings” were spared).

While Sherman never ordered the wholesale burning of Atlanta, he did little to stop many of his increasingly undisciplined soldiers from escalating targeted destruction into arson and rioting. It is difficult to avoid concluding that he arranged matters so that he could deny responsibility if Atlanta’s destruction became morally condemned, but accept credit if it was celebrated.

That seems plausible. Perspective on the burning of Atlanta can be shed by a subsequent event. Sherman’s army torched much of South Carolina, the first state to secede, including the burning of South Carolina’s capital, Columbia. Of course, lots of squid ink has been emitted over the years to make responsibility for these events confusing. Did retreating Confederates burn their own city, or was it an accident, or just the inevitable lack of discipline among troops after months of marching?

But, the most telling fact is that when Sherman’s army marching north for the final encirclement of Lee’s remnants in Virginia, crossed the stateline from hated South Carolina into less loathed North Carolina, one of the last states to secede, the fires immediately stopped. In other words, the arson that accompanied Sherman’s army was driven by political decisions and could be turned on and off at will. Whether that will was the army’s as a whole or Sherman’s personally can be debated, but the destruction of civilian property was not some sort of accident or boys-will-be-boys inevitability.

An important step is to put the actions of Sherman’s army in both macro and micro historical perspective. By the standards of, say, the Mongol Invasions or the Thirty Years War, the burning of Atlanta and the March to the Sea were quite mild. But by the extraordinarily high moral standards of the first few years of the Civil War, Sherman’s behavior was a major step backwards.

This is hard for contemporary Americans to understand since we are constantly told how morally horrible our ancestors were. Yet, most of the Civil War had been conducted in a remarkably restrained fashion compared to wars before and since. The era was the high point of Victorian morality, and the combatants strove to a striking degree to behave as gentlemen.

For example, when Robert E. Lee had invaded Pennsylvania the year before, he didn’t burn civilian property to impose economic hardship on the Union. Instead, he staked the War on a fair fight between professional armies outside of Gettysburg, PA, a three-day battle that killed thousands of soldiers on both sides but only one civilian bystander.