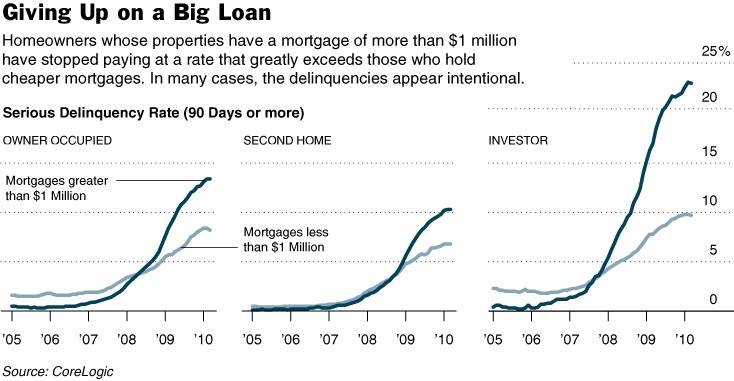 Rich Defaulters: Is This A Statistical Optical Illusion?

Biggest Defaulters on Mortgages Are the Rich By DAVID STREITFELD

LOS ALTOS, Calif. – No need for tears, but the well-off are losing their master suites and saying goodbye to their wine cellars.

The housing bust that began among the working class in remote subdivisions and quickly progressed to the suburban middle class is striking the upper class in privileged enclaves like this one in Silicon Valley.

Whether it is their residence, a second home or a house bought as an investment, the rich have stopped paying the mortgage at a rate that greatly exceeds the rest of the population.

More than one in seven homeowners with loans in excess of a million dollars are seriously delinquent, according to data compiled for The New York Times by the real estate analytics firm CoreLogic.

By contrast, homeowners with less lavish housing are much more likely to keep writing checks to their lender. About one in 12 mortgages below the million-dollar mark is delinquent.

Though it is hard to prove, the CoreLogic data suggest that many of the well-to-do are purposely dumping their financially draining properties, just as they would any sour investment.

This has been a popular topic lately, with Ross Douthat and Megan McArdle weighing in.

What hasn't been interesting to people, however, is whether the the following isn't misleading: "More than one in seven homeowners with loans in excess of a million dollars are seriously delinquent, ... About one in 12 mortgages below the million-dollar mark is delinquent."

It's fun to think that the rich are worse than the rest, and they may well be. I'm sure there are a lot of "strategic defaults." But it strikes me that this 1/7th v. 1/12th comparison may be mostly the statistical equivalent of an optical illusion. And that can give a misleading view of recent history.

Let's even leave aside the excellent question of whether people who are underwater on their homes are now, or ever were, "rich" as opposed to "high roller."

The total set of mortgages that are still being paid off goes back to 1980 and is from all over the country. If you're paying off a $40,000 mortgage you got in Fargo in 1985, well, you've built up enough equity that you might as well not default.

Right now, even after the crash, 14% of the homes for sale in Los Angeles County, which is by far the nation's largest county with 10 million people, are listed for sale at >= $1 million. (That doesn't mean they'll get it, of course, and overpriced homes tend to be overrepresented on the MLS because they don't get delisted by being sold.)

In other words, a lot of the million dollar mortgage folks are people who bought in at the top of the market in time and place. People who have had a mortgage less than 6 or 7 years haven't built up much equity to lose, and have been gone way under water.

Take a look at the New York Times' graph:

Notice in the owner occupied left hand graph that the delinquency rate on total mortgages was running about 2 percent in the Bubble Years of 2005 and 2006. That's the default default rate, the actuarial rate, of people who can't pay because their lives have happened to fall apart and so they lose their houses.

In contrast, the delinquency rate million dollar mortgages was negligibly small in late 2005. Why? Because "the rich" had better personal character back then?

Nah. It was because home prices were skyrocketing in the expensive parts of the country, like California, and everybody was doing everything they could to stay in the game of real estate appreciation. If your life fell apart in California in 2005 and you were out of cash, you could sell your house for a profit or refinance it. Now, however, if you have a million dollar mortgage, you probably got in 2003-2007 in a Bubble part of the country, and you're probably underwater now.

Does that make sense?