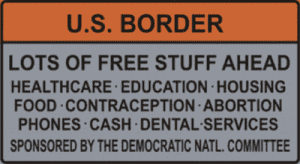 An even more dramatic example appeared today: Only Bureaucratic Neglect Could Make Ebola A Problem For The US by: Repair_Man_Jack

The only way this disease could be a major problem for a significant portion of the US population would be for a lot of people in charge to make some very poor decisions. Thus…there may be a chance of a significant Ebola problem in the United States.

but the issue of how this problem arrived to expose the faults of our rulers is apparently taboo.

I am happy to see that Rush Limbaugh agrees that immigration is central to the American Ebola situation: Rush Limbaugh: Ebola Downplayed by Dems Because It Threatens Amnesty Breitbart.com 2 Oct 2014.

I hope by now that RedState’s many Patriotic readers are aware of the news about the now-purged Daniel Horowitz, formerly the site’s most valuable writer: Daniel Horowitz Rides Again: At CONSERVATIVE REVIEW.