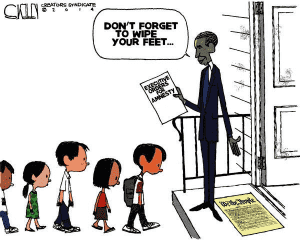 I have admired Horowitz since he immediately grasped the Constitutional issue involved in Obama’s pre-election Dream Amnesty coup d’etat: RedState Comes Through On Obamacrat Administrative Amnesty. He did wonderful work last year for instance  Horowitz on Gang Bill's Labor Market Socialization Plans and had continued this year as I applauded in Definitive Daniel Horowitz Evisceration Of GOP House Leadership Amnesty “Principles” AKA Betrayal

No more at RedState! The last piece actually in the Horowitz RedState archive is a celebration of the Dave Brat victory over Cantor on June 10th.

The next day RedState Commissar Leon Wolf (who led the hysteria there about John Derbyshire) posted The Toxicity of Immigration Rhetoric. This essentially demanded the castration of Amnesty opposition

There is a way to make the point that illegal immigration is harmful and deleterious to our country and our economy without making it sound to the casual observer that what really makes your skin crawl are the hordes of dirty brown people you see more and more of these days.

A good start would be to avoid language that invokes deliberate images of warfare like “invasion” and “invaders” or that suggests a belief that the damn Mexicans are just here to steal our welfare….a tell tale sign of someone whose objection to immigration is based on “otherness” rather than sound legal policy

Horowitz has not gone silent. He has continued to post excellent work at his website The Madison Project from which many of his articles were traditionally cross-posted. I suggest The Madison Project is now more important for Patriots. Significantly the site is not listed as one of RedState’s ‘Friends’.

RedState’s coverage of the Obamacrats’ No Border policy has slackened and become ambivalent. Erick Erickson is musing about the electoral implications of the controversy for instance in the interesting The Chamber’s Immigration Stance Hurts Their Georgia Pick  July 233d 2014 which cheeringly suggests being associated with the Chamber of Commerce is becoming dangerous for GOP candidates. But mostly he is taking refuge in the ridiculous distraction about Christian duty to the invaders, which plays directly into the Obamacrats’ primary stratagem. About the GOP’s passivity I see nothing.

The integrity of Israel is currently getting more coverage at RedState than is that of America.

What has happened is clear. Horowitz was too effective. The NeoCons have reasserted control. Priority Number One is preventing emergence of a Generic American Party. Amnesty coverage there will be what Federale likes to call Boob bait.

RedState is headed to being a latter day Free Republic.