Razib Khan Hired And Fired By The New York Times, Both On The Same Day! 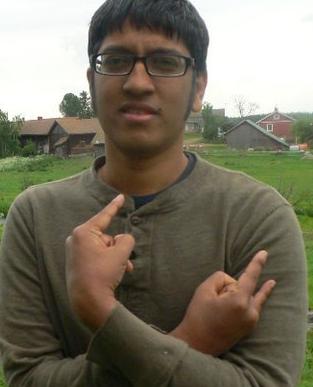 Razib Khan, fired by the NYT for "white supremacy"

Yesterday (i.e. Thursday) morning I was reading this article about a raft of new names hired to post at the New York Times blog. To my surprise, I saw the name Razib Khan among them. "Wow," I thought, "Things are looking up."

I've known Razib for 15 years or so, since we both belonged to Steve Sailer's Human Biodiversity email group. He's a brilliant guy; better read in the human sciences than anyone I know — and I know Steve Sailer, Nicholas Wade and Steven Pinker.

Just to give you a flavor of Razib, here is the kind of thing he posts. This is extracted from his own blog, March 9th, a post titled "Genetics of why Finns are less anxious than Italians." Extract, just for the flavor:

The point of this post is not to suggest that variation within the FAAH locus is not relevant to phenotypic differences in individuals or populations. There's a lot of epidemiological, and now molecular, biochemical, and neurological, evidence that this missense mutation is important in a functional sense. It is likely to make a difference in outcomes. In The New York Times piece the author speculatively suggests that variation at this SNP somehow perpetuates personality heterogeneity in our species, and is a boon to a society. Granted, this doesn't seem to be true in all cases, as the Mbuti Pygmies and Papuans may lack polymorphism here. But, it is interesting to me that the derived mutation is found at variable frequencies all across the world. There's probably a evolutionary and biomedical story here to be told about some sort of balancing selection. But, as with many narratives which are fixated upon endophenotypes, the scientific conclusions aren't quite cut and dried, and rather are still developing, because the endophenotypes themselves are at the end of a long causal chain.

That's the kind of stuff Razib writes, usually with supporting graphs, tables, and references to papers in journals with titles like Current Directions in Psychological Science. Don't read Razib if you're not willing to engage with the latest results in behavioral genetics, population genetics, computational genomics, and related areas of the human sciences.

(And, by the way, don't post to the comments thread on Razib's blog unless you're on-topic and at least as well-informed as he is on the point under discussion. Razib does not suffer fools gladly, and is merciless with commenters who don't come up to his own high standards.)

So, having known Razib all these years and admired his erudition; and having met him a few times and found him articulate, witty, and charming; I was glad to see him elevated to the status of New York Times contributor.

Glad, but also surprised. Razib is of course a race realist, as anyone who knows as much genetics as he does is bound to be. True, the Times also publishes Nicholas Wade, another race realist, to write in their Science section: but Wade is a skillful diplomat, who softens his articles on population genetics with many qualifications and cautions about the provisional nature of results and the fallacy of inferring "ought" from "is." Razib can't be bothered with diplomacy, he just talks science … and sometimes also history, and religion, and philosophy, always from a deep background of reading, quoting half a dozen scholarly books and papers to you as he goes.

Well, so I was looking forward to Razib's contributions to the New York Times blog, and to seeing him pitilessly demolish some of the innumerate idiots he'd be sharing that blog with.

Alas, it was too good to be true. I was browsing the blogs that same evening, Thursday evening, and I saw a post on geneticist Greg Cochran's blog with the title The Once and Future Khan. From which:

Razib Khan managed to get himself hired and fired by the New York Times over the course of a single day, an enviable record. Having the Times look upon you with favor is a dubious honor in the first place, something like having a leper ask you out on a date — so a quick hire-and-fire is optimal. Something for the CV, but you never had to actually hang out with the slimebags. Not as cool as "refused the Fields Medal." but pretty cool.

What seems to have happened is that Gawker.com, a Cultural Marxist website, did a hit piece on Razib exposing his associations with such racist white-supremacist racist far-right racist bigots as racist Taki Theodoracopulos, racist Steve Sailer, and oh my God! racist John Derbyshire.

I am of course exaggerating their fondness for the word "racist," but not by much: the Gawker piece is 518 words; "racist" occurs seven times (not counting the title occurrence), for an average of once every 74 words. That puts "racist" up there with "and" and "the."

The piece is also sloppy. It describes VDARE.com, for example, as being named after, quote, "the first white child born in America." Nope: as Peter Brimelow clearly states — in the page that Gawker actually links to! — Virginia Dare was, quote, "the first English child to be born in the New World." The first white child was Snorri Thorfinnsson, born six hundred years earlier.

These Marxists of course don't deal in facts, data, and accuracy. They deal in vituperation, status whoring, and social shaming. The New York Times went along with that and dropped Razib as soon as the dogs started barking. About that, I am not surprised.