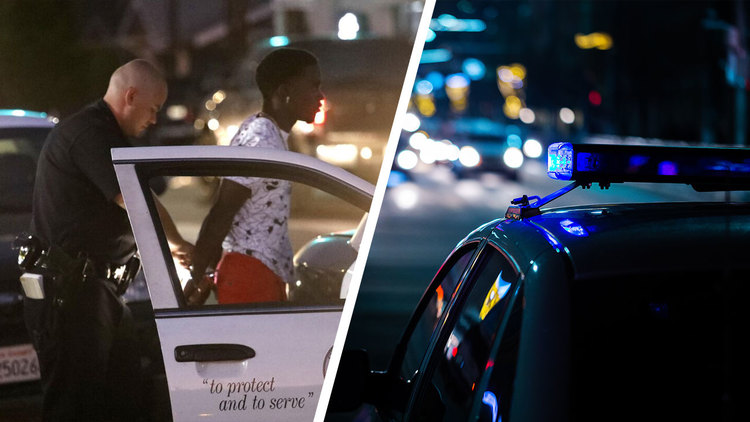 Racial Profiling? Nah, It's Just Who's Out And About In The Still Of The Night

Earlier: ”Racial Profiling” And Bad Black Drivers: Blacks Speed Twice As Much As Whites And ”Speed At Reckless Levels Even More”

Cops have a hard time telling, especially at night, the race of a bad driver, so they can’t really back-off pulling over blacks without backing-off pulling over less prestigious races as well.

Quite so.  Steve’s observation has support in a classic piece, Cops, stops and race, from August 23, 2001 in the St. Paul Pioneer Press.  (The article’s text, undated, is available here, with somewhat-ragged typography.  You can read it in a form closer to the original, archived here [PDF].)

The article is by Nick Coleman, a veteran (and now deceased) news columnist in Minnesota’s—Twin Cities.  He did ride-alongs with several St. Paul police officers and reported his surprise at some aspects of the experience.  The article opens:

Payne Avenue, corner of Jenks, 1:35 a.m. on a drizzly Saturday on St. Paul’s East Side. Police officer John Linssen has stopped a blue 1987 Chevy that is traveling slowly—too slowly with its bright lights on.

I have been riding with Linssen, playing a ride-along game, trying to guess the driver’s race and gender each time Linssen stops an errant motorist. I have been wrong almost every time, sometimes comically. At the first stop, after Linssen has followed a car with a burned-out headlight for six blocks and shined his spotlight on the back of the driver’s head, I confidently predict that the driver is a middle-age white woman with gray hair. She turns out to be a 23-year-old African-American whose dark hair reflects the white light so brightly it looks white itself.

Racial profiling—police stopping motorists disproportionately by race—is a hot-button issue. So I have decided to go on three ride-alongs with the cops—including one alongside an African-American officer—to see what it looks like on the streets. It turns out to be more complicated than I had imagined. Still, as Linssen pulls up behind that Chevy on Payne Avenue and we get out of his squad car to approach the driver, I believe I have this one nailed: Linssen’s spot hits the driver from behind, illuminating a broad-rimmed hat like my grandmother wore.

”Old lady,” I predict. ”White woman. Doesn’t even know she has her brights on.”  Wrong again. The driver turns out to be a slight, middle-age African-American man giving off a heavy smell of alcohol. His name is Dwight, and he has no driver’s license. In fact, he hasn’t had one for 10 years. He has just gotten out of the Ramsey County Jail for the 36th time.

It turned out that Dwight was headed for his 37th stay in Ramsey County’s jail.  (At least 37 is a prime number!)

Coleman’s article covers a lot of ground besides his ride-along experiences.  For example, there’s discussion of measures the St. Paul department has taken to address the usual litany of grievances, with the local branch of the NAACP naturally weighing in.  But the other item that makes a piece from 21 years ago reside in my memory is something else Coleman picked up during those rides:

As I learned while riding with officer Linssen, cops often don’t know the race of a driver before they decide to make a stop. Many stopped drivers, however, turn out to be minorities—at a much higher rate than the percentage of minorities living in the city. I’m surprised, riding with the cops at night, at how many of the people we see are African-Americans.

I’m usually wrong guessing the race of drivers we stop because more drivers are minorities than I ever imagined. The reason is simple, cops say, although it hasn’t been discussed much during the profiling debate.

”The demographics change after the sun goes down,” growls one East Side cop. ”There are fewer people on the street, but a higher percentage of them are minorities.”

So there’s another variable for Steve Sailer to consider in the ”war on noticing.”