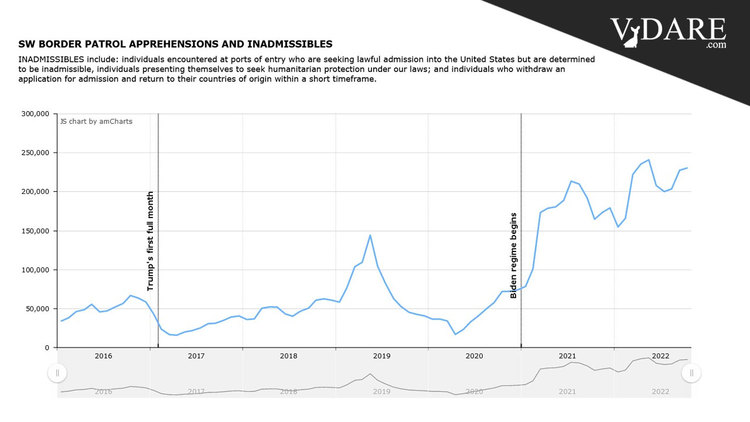 The Southwest Border Crossing numbers are out, and they're bad.

Andrew A. Arthur at CIS.org writes:

The humanitarian and national-security disaster at the Southwest border is just getting worse. CBP released its encounter numbers for October this week, and they reveal that Border Patrol agents apprehended more than 204,000 illegal entrants at the U.S.-Mexico line last month, the largest total there for the month in history (records go back to October 1999) and a 28 percent increase over October 2021 — the first month in a fiscal year that shattered previous annual records for apprehensions. And that doesn’t include roughly 64,000 got aways. Expect it to get worse, as a federal judge just blocked DHS from expelling illegal entrants under Title 42 (though that order is stayed until December).

And FY 2019 was not a banner year at the Southwest border; things were so bad there that then-DHS Secretary Kirstjen Nielsen felt pressed to declare a “border emergency” in response to the then-wave of illegal entries.

The one bright spot (such as it was) in CBP’s October numbers was that Border Patrol apprehensions fell by just over 3,000 from September. Still, illegal entries are running high during a period of the year — between May and February — when they should be dropping, significantly. They’re not.

Border Chaos Gets Worse, and Will Get Worse Yet
Apprehensions exceed 204,000 in October, not counting about 64,000 “got aways”, while a judge blocks Title 42 expulsionshttps://t.co/B7kMsAn4SB via @CIS_org

Texas Governor Greg Abbott has declared an invasion, and is taking all measures he can to to deal with it, but his problem is that Joe Biden is supporting the invasion.

Texas Governor Greg Abbott has done what Kari Lake would have done had Arizona Democrats not stolen the governor’s election in the Grand Canyon State. Abbott declared that the illegal-alien invasion at the border is, well, an invasion.https://t.co/0lRdWGQGVv