Puerto Rico is an autonomous U.S. territory and Puerto Ricans are legally U.S. citizens. Nevertheless, Puerto Rico has fielded its own Olympic Team since 1948 and has competed in every single Summer Olympics since, including the 1980 Moscow Olympics which the U.S. boycotted.

See my article from four years ago, Doesn’t Puerto Rico’s Passionate Support For Its Olympic Team Tell Us Something?

“I think I united a nation” said the medal-winner herself. Of course, she meant the Puerto Rican nation.

The New York Daily News, published in a city with plenty of Puerto Ricans, reported that

Puerto Rico netted its first ever Olympic gold medal Saturday thanks to unheralded tennis player Monica Puig. The 22-year-old Puig pulled off a stunning upset in the women’s tennis final — defeating reigning Australian Open champion Angelique Kerber. “I think I united a nation,” Puig said afterward. “And I just love where I come from.” Spontaneous celebrations erupted in Puerto Rico, in the capital of San Juan and elsewhere, after the unseeded Puig bested the second-seeded Kerber 6-4, 4-6, 6-1. Fans had filled pubs and restaurants to watch the drama unfold. The epic win capped a highly improbable run for Puig.

The article includes a photo of the fans going wild back in San Juan, Puerto Rico. 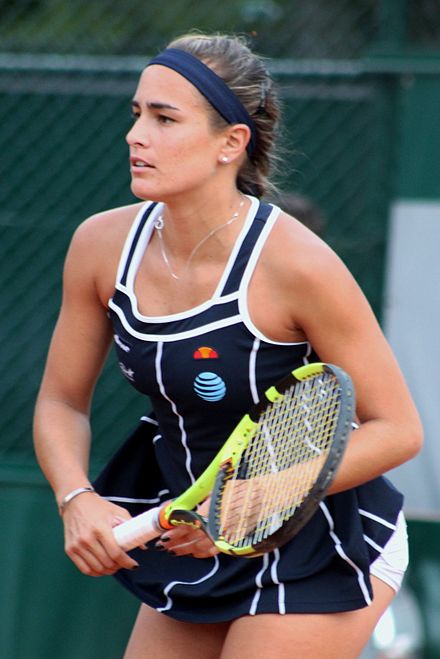 If you look at a photo of Monica Puig, it’s obvious that she’s white, that is, of principally European ancestry.

Monica’s mother is Puerto Rican but her father is Cuban-American.

(You might be thinking that the surname Puig doesn’t sound like a typical Spanish surname. It’s actually a Catalan surname, from Catalonia in northern Spain, where they actually speak a different language. )

Although Monica Puig was born in Puerto Rico, she resides and trains in Florida. Thus she could have competed for the U.S. But she wanted to compete for Puerto Rico.

Quite significantly, when Monica received her gold medal, the national anthem that was played was not “The Star Spangled Banner”, but “La Borinqueña”, and Monica wept with emotion.

In this interview with CNN’s Christina Macfarlane, the bilingual Monica (who speaks English without a foreign accent) discusses the emotion of her victory and of hearing the Puerto Rican national anthem. Incredibly, she didn’t even know it very well, and her Cuban-American father sent her the lyrics in case she won. But it was still very emotional.

So Monica Puig, despite living in the U.S. mainland, despite not knowing La Borinqueña very well, still identifies with Puerto Rico, still wants to compete for Puerto Rico, and weeps when she wins a gold medal and hears La Borinqueña.

I congratulate Monica Puig, but I have to ask, with all due respect, if Puerto Ricans feel this way , shouldn’t they just have their own independent country?