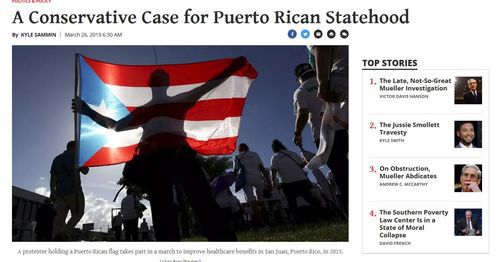 Whenever you hear an article begin with the formulation "The Conservative Case For," you know it is going to be something idiotic. National Review specializes in this genre and the newest example of this disaster is A Conservative Case For Puerto Rican Statehood by Kyle Sammin. [March 26, 2019]

Puerto Rican statehood, besides being the right thing to do on the merits, would also enhance the nation’s appreciation of federalism and further entrench the conservative value of local control. Puerto Rico differs in significant ways from the rest of the United States, but this should be seen as an asset, not a liability. Admitting it to the union would increase diversity among the states, forcing us to question whether one-size-fits-all federal laws are the best way to govern an increasingly varied people.

The right thing to do on the merits is cut this albatross loose. Puerto Rico is an economic basketcase and it would make more sense for America to pay the island to go away. Puerto Ricans are not Americans and don't think of themselves as Americans. Many of those of Puerto Rican descent, like Alexandria Ocasio-Cortez, are deeply hostile to the historic American nation. And Sammin's happy talk that Republicans "might well win" Senate or governor's seats on the islands sounds as hollow as the reassurances that Hispanics are "natural conservatives" or that this is the year Republicans will win the black vote.

Yet leave all that aside. Sammin's makes the usual conservative argument that a legal arrangement will somehow force leftists to think differently about issues of local control. He has it backwards. By creating millions of new "fellow Americans" that speak Spanish, have a different national identity, and are economically backward, there will be a whole new class of the oppressed that will claim concessions on the grounds of being victims of discrimination or separate treatment. It will empower federal intervention into more states and private businesses because the federal government will now have to make sure that there is no "discrimination" against Spanish speakers. Needless to say, this will also be the detathblow to any attempt to establish Official English and at least maintain the pretense that Americans can speak a common language.

There's also no reason the Left will accept any restrictions in the name of local control. During the gay marriage debate, the Left was repeatedly defeated by referendums in many states, yet it simply pushed through until gay marriage was established nationally by fait. When local states and communities tried to control illegal immigration, the Left simply steamrolled them in the name of federal control. When President Trump took over, they flipped on a dime and started arguing for the rights of cities to have their own immigration policies. Consistency is secondary to serving the racial and ethnic interests of their constituents. Meanwhile, conservatives quibble about process and appeal to a Constitution that has been irrelevant for decades.

In politics, the side that is arguing on the grounds of process is always losing.

This is just another example of conservatives putting the stamp of legitimacy on a leftist power grab. It seems to be what the Beltway Right exists to do. Rather than fighting for the historic American nation, National Review is just controlled opposition.

Contra Sammin, the main reason that Puerto Rico should not be a state is that we aren't "an increasingly varied people." "We" aren't a people at all. If Puerto Ricans are Americans, then "Americans" aren't a thing. It is an insult to both their identity and ours.

If we are all just "Americans," then we're really just deracinated consumers living in a common marketplace. Beltway Conservatives might be happy with that situation, but real conservatives, and real Americans, should not be.