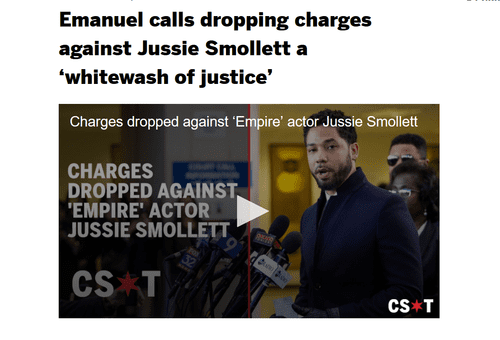 By Andy Grimm and Mitchell Armentrout

In a highly unusual decision, prosecutors on Tuesday dropped charges against “Empire” actor Jussie Smollett that accused him of staging a hate-crime attack against himself — a move that Mayor Rahm Emanuel later called a “whitewash of justice.”

The actor was indicted March 8 with 16 counts of disorderly conduct for allegedly hiring two men to attack him near his Streeterville home in January. The $10,000 posted for Smollett’s bond will be turned over to the City of Chicago Law Department.

Chicago police officials said Supt. Eddie Johnson was not briefed on the decision to drop charges and learned about it in the middle of a police academy graduation ceremony scheduled at the same time State’s Attorney Kim Foxx’s office announced it.

A police source said Johnson was “furious” and maintained the evidence against Smollett was “rock solid.”

Later in the day, Johnson said he believed “the city is still owed an apology.”

“If you want to say that you’re innocent of a situation, then you take your day in court. . . . If someone falsely accused me, I would never hide behind a brokered deal and secrecy.”

Emanuel ripped the decision to drop charges against Smollett.

“This is without a doubt a whitewash of justice, and sends a clear message that if you’re in a position of influence and power, you’ll get treated one way, other people will be treated another way,” Emanuel said. “There is no accountability in the system. It is wrong, full stop.”

Ed Wodnicki, the 18th District police commander who oversaw the investigation, called the decision to drop the charges “a kick in the gut.”

He said the $10,000 in bond forfeited by Smollett “doesn’t come close” to covering the cost in resources and manpower to probe the heater case that drew national attention.“I think the citizens of Chicago should be upset about that,” Wodnicki said.

“We wasted time and effort on a reported serious, serious crime, to get to the point that it’s a lie? I want reimbursement. I’m a citizen in the city of Chicago. I want my money back,” he said.

“We were absolutely prepared to go to trial. We were rock solid. We were excited to have this case prosecuted,” Wodnicki said.

Police officials said they’d presented “only a sliver” of the evidence against Smollett publicly — and that evidence now remains sealed under a judge’s orders.

Ahern estimated the cost of CPD’s Smollett probe in the “hundreds of thousands” and said city budget were workers were still tallying the full investigation tab.

The Fraternal Order of Police on Tuesday renewed its call for a federal investigation into Foxx’s “interference” in the Smollett case.

“The conduct of her office from the very beginning of this cases was highly, highly suspicious,” Martin Preib, FOP second vice president, told the Chicago Sun-Times.

‘Incredibly difficult time’
After the court hearing on Tuesday, Smollett said, “I want to thank the state of Illinois for attempting to do what is right.”

“I want to thank my family, friends, the incredible people of Chicago . . . who have prayed for me, who have supported me. . . . I want you to know that not for a moment was it in vain. I’ve been truthful and consistent on every single level since day one.”

“This has been an incredibly difficult time, honestly one of the worst of my entire life.”

Now he will go back and continue to “fight for the betterment of the lives of marginalized people everywhere.”

Smollett lawyer Patricia Brown Holmes said there was no deal with prosecutors.

“There is no deferred prosecution . . . The state dismissed the charges,” Holmes said. “We believe it was the correct result . . . We are very anxious for Jussie to get on with his life.”

The studio and network behind “Empire,” 20th Century Fox Television and Fox Broadcasting, praised the decision to drop charges against the actor: “Jussie Smollett has always maintained his innocence and we are gratified on his behalf that all charges against him have been dismissed.”

The decision to drop charges
First Assistant State’s Attorney Joseph Magats said the decision to drop the charges should not be interpreted that Smollett did not do what police and prosecutors have alleged — pay his assailants to fake the attack and then falsely report the incident to police.

Nor did dropping the charges mean that Smollett was a victim of a crime, Magats said emphatically.

“Absolutely not. We stand behind the CPD investigation done in this case, we stand behind the approval of charges in this case,” Magats told the Sun-Times. “They did a fantastic job. The fact there was an alternative disposition in this case is not and should not be viewed as some kind of admission there was something wrong with the case, or something wrong with the investigation that the Chicago Police did.”

Magats, who became the final decision maker on the case after Foxx recused herself in mid-February, said prosecutors made the decision to drop the charges against Smollett under the same criteria they would any other defendant.

“It’s a nonviolent crime. He has no felony criminal background. If you start looking at the disposition in the case, in every case you need to look at the facts and circumstances of the case, and the defendant’s background.”

Magats noted that while there was no court-ordered community service, Smollett had been active in the community even after he was charged. Sealing records as part of deferred prosecution is common, Magats said.

Lawyers surprised by prosecutors’ move
The move by the state’s attorney’s office had many attorneys in the hallways of the Leighton Criminal Court Building scratching their heads. What Foxx’s office characterized as winding up the case under “deferred prosecution” laws appeared to be the State’s Attorney’s Office simply dropping the charges little over a month after he was charged.

Dave Gaeger, a defense attorney in the courtroom during the Smollett hearing, said he was shocked and surprised by what he heard. Smollett was not required to perform additional community service, avoid further charges for a set period, or fulfill any other conditions to have the charges dropped, and turning over his bond money to the city was not described as “restitution” or a fine.

“This was a unique outcome for a case of this magnitude, or at least for the amount of attention it’s gotten, and it’s not very transparent,” Gaeger said. “There is deferred prosecution, but based on what I heard in court today, that’s not what this was. (Smollett) was not in a pre-trial diversion program. There was no time frame set for him to complete certain conditions. His case was dismissed, based on community service he’d already done, and money.”

Gaeger said he had never seen a similar conclusion to a case, and said he’d certainly never been offered similar deals by prosecutors.

“No defense attorney is going to disparage another lawyer for getting the best possible outcome for their client . . . but this conclusion, in a case with all this intrigue around it, really makes me wonder.”

Kiera Ellis, a spokeswoman for Foxx’s office, said Smollett’s willingness to turn over the $10,000 he posted was key to the decision to resolve the case.

“There would be no nolle without the forfeiture,” she said, referring to the technical term for wiping out the charges, the Latin “nolle prosequi,” meaning “to refuse to pursue.”

Whatever agreements were put on paper in the case will be difficult, if not impossible, for the public to see. Smollett’s case was put under “immediate seal” by Watkins and none of the case files will be available for public viewing, according to Watkins’ courtroom clerk.