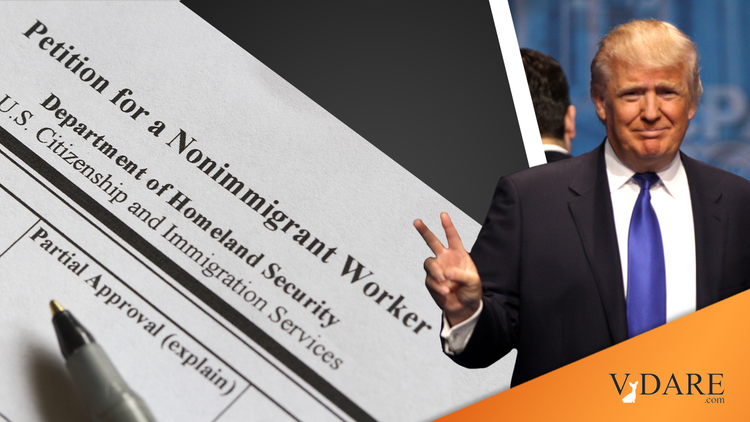 The Trump administration announced new rules this week that should make it harder for employers to replace high-skilled Americans with foreigners. The Department of Labor and the Department of Homeland Security increased the requirements for H-1B visa holders in a bid to dissuade businesses from hiring them.

The new rules mandate higher wages for H-1B holders, shorten their length of stay, and require foreign candidates to have a degree in the specific field they’re applying for. Under the new rules, H-1B visa holders can only stay in the country for one year rather than three years under the old regulations. They would also be barred from working at companies that did not hire them [Trump Administration Announces Overhaul of H-1B Visa Program, by Michelle Hackman, Wall Street Journal, October 6, 2020].

The move drew the typical bleating from the cheap labor lobby. “[T]hese rules have the potential to inflict serious harm upon many American companies,” cried U.S. Chamber of Commerce immigration director Jon Baselice to the Wall Street Journal.

The change shows the administration continues to do great work on immigration through executive actions. The administration has already made it harder to receive an H-1b visa, with over 15% of applicants being rejected last year. Only 6% were rejected in the final year of Barack Obama.

It’s essential Trump gets more immigration patriots in the judiciary to defend sensible immigration policy. The courts shouldn’t rule in favor of the cheap labor lobby over American workers.