Sometimes deportable criminal aliens can't be deported after their prison sentence is up, because the "sending country"—their country of origin, doesn't want to be a "receiving country" and refuses to accept them. The Supreme Court has said(overstepping its authority as usual) that even if they're illegal aliens, they can't be kept in immigration detention indefinitely if no one will take them.

It's the job of the State Department, at the direction of the President, to put pressure on these countries to take back their criminals, using whatever diplomatic levers are available, the most obvious being to refuse to issue any visas—including visitors visas to countries that won't cooperate.

Trump promised to do something about this in his big immigration speech, and in Mother Jones Democratic operative  Kevin Drum [Email him] was shocked by the idea:

Donald Trump's big immigration speech contained few surprises. He spent a lot of time on illegal immigrants who are criminals, but his solution was pretty simple: Get rid of them. Period. End of story. And not just over the border, either. Way over the border so they can't come back. And if their home countries don't want them back, tough. Apparently planes full of murderous illegal immigrants are going to be landing all over the world whether anyone likes it or not.

Donald Trump Plans to Parachute Criminals Into Other Countries Whether They Like It Or Not, September 1, 2016

Obviously, Trump plans a normal diplomatic initiative, the kind that Secretary Clinton failed to undertake, as he said in the speech:

Number seven, we will insure that other countries take their people back when they order them deported.

Due to a Supreme Court decision, if these violent offenders cannot be sent home, our law enforcement officers have to release them into your communities.

And by the way, the results are horrific, horrific. There are often terrible consequences, such as Casey Chadwick's tragic death in Connecticut just last year. Yet despite the existence of a law that commands the Secretary of State to stop issuing visas to these countries, Secretary Hillary Clinton ignored this law and refused to use this powerful tool to bring nations into compliance. And, they would comply if we would act properly.

However, while Trump's plan for " murderous illegal immigrants" is simply to send them back normally after persuading the sending country to receive them, with notice to those countries' officials who may want to meet the plane, and have a word with the criminals.

But how many of you, seeing Drum's headline about a plan to "Parachute Criminals" into recalcitrant countries thought "That would be awesome!" 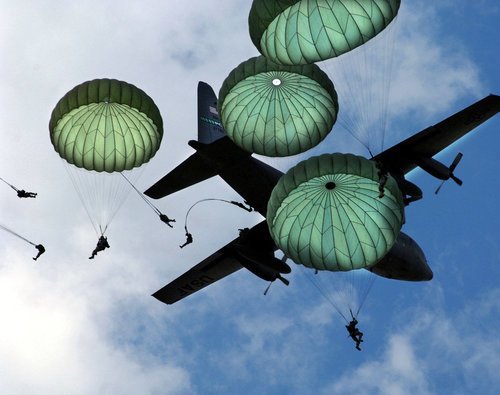 I think it should be considered, as a voluntary program. Many deportable illegals are fit young men of military age—the same kind of person you recruit for paratroopers.  Of course, none of these aliens could pass Airborne qualifications for the actual Army, because of being foreign, criminal, having a drug history, having a low IQ, not really speaking English, and so on, but the part where you actually jump out a plane is the easy part. (Landing is a bit tricky.)

The wartime OSS used to  parachute people into France without much in the way of actual parachute training, and if you can offer a young criminal a choice between making one jump into a fairly soft part of his home country, and staying locked up, I think he might go for it.

Feel free to thank Kevin Drum for his suggestion.