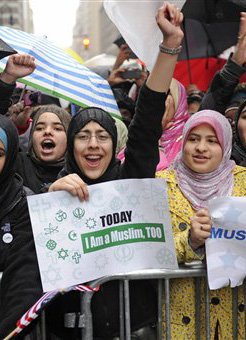 The long-anticipated hearing about radical Muslims residing in America in Chairman Peter King’s House Homeland Security Committee is coming up on Thursday, and the manufactured brouhaha is heating up.

In New York on Sunday, a couple hundred protesters showed up to complain about King’s investigation of Islamic diversity, with identical signs reading ”Today I Am a Muslim Too.” Photos of the crowd (right) indicated that many were Muslims every other day as well.

The terrorist-friendly Council on Islamic Relations has been the major instigator by stirring the pot and accusing Rep. King of all sorts of evil. The Hamas-supporting Executive Director Nihad Awad recently wrote that the announcement of hearing ”sent a shudder through our community” (King’s attack on U.S. Muslims: Head of CAIR says terrorism hearings will stoke fears).

A Detroit-based CAIR spokesMuslim said the hearing ”smacks of McCarthyism.”.

Imam Rauf (formerly of Ground Zero Mosque fame) warned that the hearing would fuel radicals in the Muslim world. (What doesn’t?)

The White House was sufficiently concerned about Islamic sensitivity to send out a speechmaker Sunday to maintain coddling:

The White House took a preemptive step to defuse an emerging controversy Sunday, sending out a top aide to reassure American Muslims that the U.S. government doesn’t see them as a collective threat.

In his speech to members of the All Dulles Area Muslim Society, McDonough said, ”The bottom line is this: When it comes to preventing violent extremism and terrorism in the United States, Muslim Americans are not part of the problem; you’re part of the solution.”

Actually, one of Rep. King’s major gripes is that ”moderate” Muslims don’t come forward to authorities enough about proto-jihadists in their tribal communities.

So the whole thing is blowing up into a big deal in the media. There’s nothing like conflict to excite the MSM honchos.

Indeed, the hearing has certainly been a great opportunity for camera-loving Muslim windbags to get their mugs on television as pundits!

So we hear more of the Muslim victimhood theme which has been much used by well paid Islo-mouthpieces; it is the only card they have to play, still the credulous liberal media is still slurping it up.

More importantly, the uproar against Peter King is yet another example of how Islam cannot abide free speech: any criticism of the totalitarian belief system must be stamped out, according to Muslims. I consider an attempt at physical disruption of the hearing to be a distinct possibility (like many events that are critical of Islam). Certainly there will be lots of security.

Chairman King has twisted and turned and accommodated to make his critics back off – which was never going to happen. He invited one of the most annoying naysayers, the Muslim Congressman Keith Ellison, to appear as part of the hearing. In fact, the persons listed on the HSC website as witnesses are pretty underwhelming: Ellison, Rep. Frank Wolfe, Zuhdi Jasser, LA Sheriff Lee Baca, Abdirizak Bihi (Director, Somali Education and Social Advocacy Center) and private citizen Melvin Bledsoe.

See more details on this cast of characters from the Investigative Project: Witness List Set for King Hearing.

King could easily have gotten more impressive, knowledgeable people – Robert Spencer, Ayaan Hirsi Ali, Nonie Darwish, Steve Emerson – but the Chairman chose another route which he may have felt was less confrontational. That choice was a disappointing weakness, in my opinion. It’s possible Rep. King could still pull off an educational event, since there is more than one way to indicate a growing danger to the country.

He keeps insisting that he hasn’t been intimidated by political correctness and general badmouthing. Let’s hope to be pleasantly surprised.

However, I’m not hopeful that the elephant in the room – the dangerous insanity of increasing Muslim immigration – will be considered.