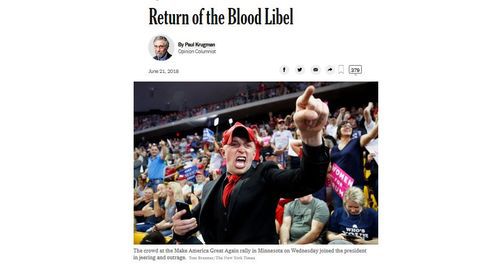 Paul Krugman Appeals for Calm and Avoidance of Cliché: "Return of the Blood Libel"

From the NYT Opinion columns:

Return of the Blood Libel

The speed of America’s moral descent under Donald Trump is breathtaking. In a matter of months we’ve gone from a nation that stood for life, liberty and the pursuit of happiness to a nation that tears children from their parents and puts them in cages.

What’s almost equally remarkable about this plunge into barbarism is that it’s not a response to any actual problem. The mass influx of murderers and rapists that Trump talks about, the wave of crime committed by immigrants here (and, in his mind, refugees in Germany), are things that simply aren’t happening. They’re just sick fantasies being used to justify real atrocities.

And you know what this reminds me of?

Uh, let me guess … Trump’s immigration policies remind Paul, a retired Princeton professor, of … how hard the Princeton Admissions department works to keep out undocumented admittees, turning away 95% of applicants, many of whom have dreamt desperately of going to Princeton? That when you come right down to it, both Ivy League colleges and the United States have rational reasons for limiting the quantity and filtering the quality of admissions?

Each year, after all, Princeton receives tens of thousands of admissions essays from children that are hard luck stories about why my grandma’s death or my oppression by the popular kids means I should be let into Princeton.

And Princeton rejects about 95% of them.

So, Paul might inform his NYT readers, that college admissions departments are just like ICE. Both skeptically listen to hard luck stories and reject many of them.

No? That’s not what Paul came up with?

Okay, I imagine this Nobelist’s novel insight must be even more original. Let’s see what brilliant breakthrough analogy Krugman came up with today about what Trump’s immigration policy reminds him of:

The history of anti-Semitism, a tale of prejudice fueled by myths and hoaxes that ended in genocide.

Oh. Wow. I never saw that coming. Paul really showed intellectual flexibility by avoiding all the cliched possibilities and going instead for the most original response in the history of punditry.

… I don’t know what drives such people — but we’ve seen this movie before, in the history of anti-Semitism.

The thing about anti-Semitism is that it was never about anything Jews actually did. It was always about lurid myths, often based on deliberate fabrications, that were systematically spread to engender hatred.

… No, the real crisis is an upsurge in hatred — unreasoning hatred that bears no relationship to anything the victims have done. And anyone making excuses for that hatred — who tries, for example, to turn it into a “both sides” story — is, in effect, an apologist for crimes against humanity.

So, anybody who is conflicted or ambivalent on immigration policy is “in effect, an apologist for crimes against humanity.”

You need the kind of overwhelming demographic diversity we see among the NYT Columnist roster to come up with this quality of out-of-the-box diversity of ideas.