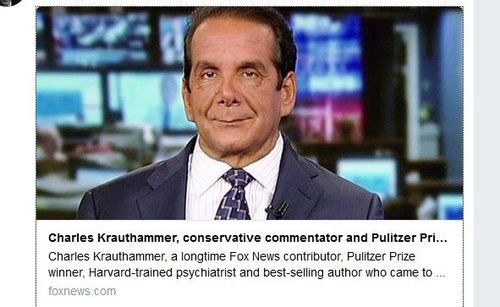 VDARE.com: Sorry, Charles Krauthammer Was WRONG On The National Question

Pulitzer Prize-winning neoconservative pundit Charles  Krauthammer has died, age 68,  something he announced himself was likely a week ago.

How smart was  the late Charles  Krauthammer? Charles Murray, who knew him personally, once provided evidence of Krauthammer’s high IQ.  Murray was discussing the IQ test where you repeat back a number of digits either in the same order you heard them, or in the reverse order.

The average adult gets a digits-backward score of 5 (Jensen 1998: 263). You may compare your own score with the highest I have observed, 13 and 12, achieved respectively by José Zalaquett, former chairman of Amnesty International, and the political analyst Charles Krauthammer. Zalaquett’s score might have been higher if he had not been in a car weaving through traffic at 70 miles per hour on the New Jersey Turnpike. Krauthammer’s score might have been higher if he hadn’t been driving.[ The Inequality Taboo, annotated version of the article that appeared in the print edition of the September 2005 issue ofCommentary.]

The wheel-chair-bound Krauthammer was driving a car with hand controls.

So we can say Krauthammer was highly intelligent, but on issues involving the National Question, he just didn't get it. Peter Brimelow wrote in the year 2000 that when, in 1994, the Parti Quebecois held a referendum in Quebec on separation and came within an ace of winning, that the

The shock was devastating. In its wake, numerous prominent Canadians – for example, Conrad Black, proprietor of the National Post – finally began to say the unsayable: Quebec's separation is only a matter of time.

Among them was, guess who, Charles Krauthammer. Even more telling, in the November 3 1995 Washington Post he actually bemoaned that Canada should break up over "an issue as relatively trivial as language."

An issue as relatively trivial as language. I don't blame Krauthammer for being wrong about Quebec. (Well, I do wonder how he can continue to sound so cocksure about everything). He was, after all, just reflecting the conventional wisdom. But he was indeed wrong, spectacularly, and for a characteristic reason: he cannot or will not appreciate the reality, and the utility, of the national community to the peoples among whom he lives. [More]

Krauthammer got a mention here after Romney's defeat in 2012:

Thus Friday's night star attraction was neoconservative political columnist (and born-again amnesty supporter) Charles Krauthammer. He received a rock star welcome and the applause only built as he confirmed what the audience already believed: “I don't believe in the demographic theories,” Krauthammer assured the throng.

Furthermore, Krauthammer claims to believe that Hispanics are “natural conservatives”—aside from immigration. He actually said: “I think that's one community, if we were running ideologically, we'd win.” [More]