Earlier: Matt Taibbi Notes That Stories About “Racist” Comments Don’t Have The Actual Comments These Days

Matt Taibbi wrote on Substack that

The New York Times coverage of the recent staff revolt at Teen Vogue against editor Alexi McCammond noted “Staff Members Condemn Editor’s Decade-Old, Racist Tweets,” but declined to actually publish the offending texts, so readers might judge for themselves.

For the record, here are Teen Vogue editor McCammond’s tweets, the highlighting on “Asian” being the result of someone searching her old Tweets for that word: 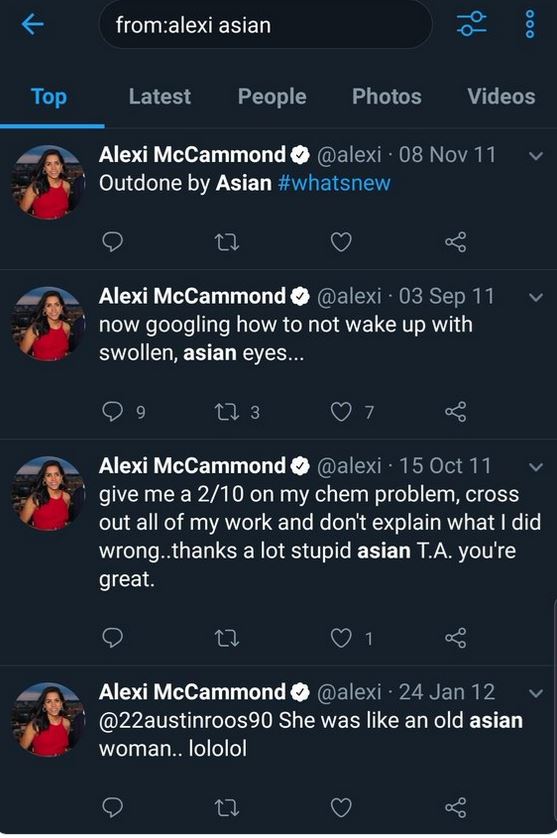 So proud of @alexi, @TeenVogue has hired a superstar. I've been fortunate to be on several shows with Alexi and she's brilliant and this is a fabulous choice.https://t.co/WZmfT6SlwB

Ms. McCammond is visibly a woman of color—just barely, but much more than Meghan Markle. You'll notice that she's "outdone" by an Asian, presumably at her university,  and has an Asian teaching assistant who is much more knowledgeable about chemistry than her, but seems unable or unwilling to dumb it down to where she can understand it.

Without bothering to find out what elite school she may have gone to, I can tell you that under Affirmative Action she would be admitted to a school where all the whites were smarter than her, because (follow this closely) if she were actually smart enough to attend her school, she would have been recruited by a better school. The Asians would be even smarter than the whites, because unlike blacks, they're discriminated against.

So Asians, at whatever university she was at, would be way ahead of her, and might even have Noticed that she was in a better school than a non-black  woman could get into. No wonder she hates them.