Earlier, by Steve Sailer: Why Is The Burden Of Proof In Deporting A Convicted Sex Criminal On America Rather Than On The Sex Criminal?

They aren’t sending their best rapists. Not Mexico, well, this time, but neither is the Democratic Republic of the Congo. It has been revealed that the black rapist who attacked a woman openly and publicly on a train full of passengers was a long-time criminal and illegal alien who was not deported. (h/t Azzmador at the Krypto Report) 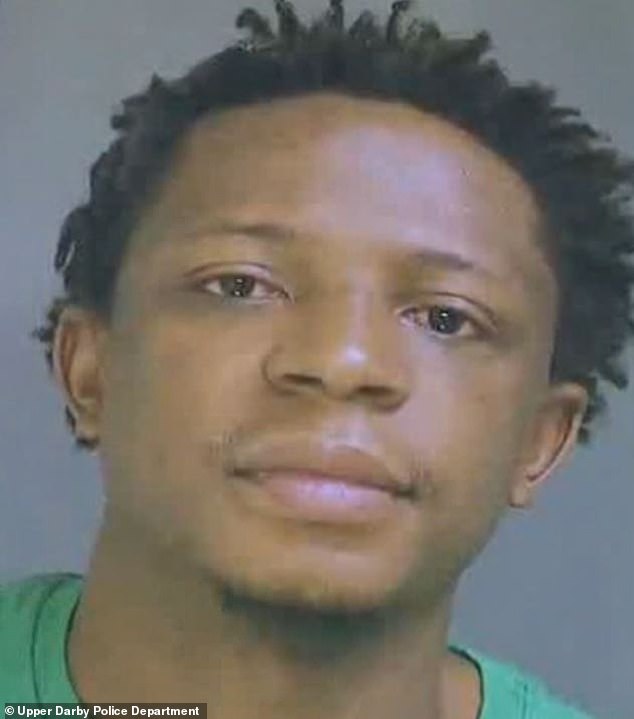 The man who allegedly raped a woman in front of passengers on a Philadelphia area-train already has a criminal record and had overstayed his student visa – but was protected from deportation by the immigration system.

Tucker Carlson Tonight has confirmed that Fiston Ngoy, who was arrested last week for allegedly raping the woman in a brutal attack on a SEPTA train in front of other passengers, came to the U.S. legally in 2012 on a student visa.

However, the 35-year-old Congolese national’s visa was terminated in 2015 because he failed to remain a student.

So, with a long criminal history and just being a regular run-of-the-mill illegal alien, why was Ngoy not deported? Let us address the most salient facts.

First, Ngoy had entered the United States as a student, then failed to maintain his status as a student. This happens in a number of ways, mostly by students abandoning their studies, then generally going on to work illegally. Other times they fail to even graduate, ending their status as students. Students are admitted on the F-1 Non-Immigrant Visa (NIV), although the M-1 and J-1 NIVs are also used for academic or other studies, though these two NIVs are used less frequently. All student visa holders have to be pursuing a degree of some sort. For F-1 NIV holders that is generally a Bachelor’s, Master’s, or Doctorate degree. Sometimes students pursue all three degrees serially, but Ngoy appears to have had his status “terminated” as the story states.

That means he either failed to complete or register for classes and was dismissed from the educational institution, where he was from 2012 until 2015. Note that he was not immediately arrested by U.S. Immigration and Customs Enforcement (ICE), the component of which that is responsible for arresting failed students is Homeland Security Investigations (HSI), which I derisively refer to as ICE SVU because it is so unconcerned with enforcing immigration law. This was, as of 2015, official policy for ICE SVU as they were assisting with the Obama Regime Administrative Amnesty.

Now, there could be reasons that Ngoy may have been allowed to remain legally; he might have applied, while he was in status as a student, for adjustment, generally based on an employment offer or by marriage to a U.S. citizen. There is nothing in the story about that. Nor is there anything concerning an application for asylum. So, we have no evidence that Ngoy had taken any steps that would have interfered with a quick deportation.

In fact, Ngoy, for a number of years, has been engaged in his own little crime spree.

Meanwhile, court records show that he racked up “multiple arrests and two misdemeanor convictions, one for controlled substances and one for sexual abuse.” Ngoy pled guilty in 2017 in Washington D.C. to the sexual abuse misdemeanor and was sentenced to 120 days in prison and nine months probation.

He was put in immigration detention in January 2018. However, he was never deported because he received a “withholding of removal” from an immigration judge in March 2019 after the Board of Immigration Appeals found that his misdemeanor sex offense was not a “serious crime” that would have made him ineligible for such a stay.

Now, at the time of his conviction for a drug offense, Ngoy was an illegal alien and subject to deportation for just that, but he again becomes deportable for the criminal conviction for drugs as well as for being an alien who uses drugs, so at this point he is deportable for 1) being an illegal alien after his status as a student ended, 2) having a criminal conviction involving moral turpitude, 3) being a drug user or dealer, and upon his second conviction, 4) being deportable for multiple criminal convictions for crimes involving moral turpitude. For the record, any conviction is actionable, misdemeanor or felony. Even an infraction is admissible if the crime involves drugs. In summary, according to Title 8 United States Code, Section 1227, Deportable Aliens, Ngoy should have been removed based on multiple counts.

So, at some time he was arrested and placed in removal proceedings, likely by the component of ICE that deals with deportation of aliens, Enforcement and Removal Operations (ERO), after he served one of his sentences. ERO are the good guys at ICE, by the way.

So, at some point a kritarch (Immigration Judge [IJ]) at the Executive Office for Immigration Review (EOIR), the immigration courts, makes a decision on his case, then either Ngoy or the government appeals the decision. It appears to me that Ngoy was undercharged in the removal proceedings, with him only being charged with a deportation offense for the conviction for his first sexual assault. Either at the hearing he was not held to be deportable for that single offense by the IJ and the government appealed to the Board of Immigration Appeals (BIA), also part of the EOIR and the appeal system for decisions made by the IJ, or Ngoy was held deportable by the IJ and he appealed to the BIA, then we get the atrocious BIA decision.

For some obscure reason, the BIA decided that sexual assault was not a deportable offense, which, for the record, is a deportable offense, and ordered him released or remanded to the IJ, who ordered him released. The real question is why? Not for the mistake on the criminal conviction issue, but that Ngoy was deportable for several other reasons, the most important of which was that he had no legal status, and was therefore deportable.

Now, there might be a reason for this: that the ICE Office of the Principal Legal Advisor (OPLA), the attorneys at ICE who prosecute immigration cases before the EOIR, only charged Ngoy with one deportable offense. That seems quite incredible, as there were so many additional charges that made Ngoy deportable. OPLA has their own issues as Deep State saboteurs of immigration enforcement, but even this seems beyond them, failing to fully charge an illegal alien. But then we have the problem of the IJ.

The other problem is why did this decision happen under the Trump Administration? Both Jeff Sessions and Bill Barr actively overturned wrong decisions by the BIA, and quite aggressively. Why was this obviously wrong decision by the BIA not overturned by the Attorney General, who has that authority? And why was Ngoy not just deported for the most salient charge, that he was in the United States illegally? Why wasn’t the other criminal offense used to remove him? And why was a dangerous alien with two criminal convictions released by ICE ERO? Well, the only answer I have is on the custody issue,: after 2018, Congress significantly reduced the funding for detaining illegal aliens, even those, like Ngoy, who are required by law to be detained. Likely after funds for detention of illegal aliens were reduced, Ngoy was released. Perhaps some other issue kept his immigration case active. I wish reporters were better at this complicated issue.

We also have another issue: why are the deportation laws so unclear? That is the fault of Congress. Why mess about with defining some but not other laws as Crimes Involving Moral Turpitude (CIMT), as in the deportation laws, a definition of which involves volumes of legal scholarship? Why not just make the law simpler, making any alien convicted of any misdemeanor or felony deportable?

This raises so many questions. Clearly we are either missing critical information or there is gross incompetence at ICE OPLA and within the EOIR and BIA. But we will not get any fixes from the Biden Regime. Biden wants as many African rapists as possible in the United States to punish and replace Whites. Biden is waging his own little war on Whites by importing rapists. That should not stand.

As is typical of reporting, new, and more accurate, information has turned up. The first reporters did not have all the facts of the case. We now know why Ngoy was allowed to stay. He applied for and was denied asylum by the IJ, but the IJ then granted the rapist Withholding of Removal. Withholding is a kind of asylum for those who do not qualify for asylum, usually criminal aliens, as criminal aliens are statutorily ineligible for asylum, though a misdemeanor does not disqualify a applicant for asylum. In fact, Withholding has a higher standard of evidence of persecution than an asylum application, though in practice it is given away like candy. Basically, Withholding is just another chance for failed asylum seekers. To quote Michelle Malkin, it’s not over until the alien wins. And Ngoy was the winner, his American victims were the losers.

Ngoy pleaded guilty to the sex charge in 2017 in Washington, DC and was sentenced to 120 days in jail. He was then placed in immigration detention in January 2018. But he remained in the country.

He was not deported because an immigration judge granted him a “withholding of removal” in March of 2019. This followed an appeals board that would rule that his sex crime was not a “serious crime” that would make [him] eligible for deportation.

[Man Who Raped Woman On Philadelphia Train Revealed To Be Illegal Immigrant With Past Sex Abuse Record, by Hannah Nightingale, The Post Millennial, October 20, 2021]

Missing, though, is which side appealed, the government or Ngoy. So we don’t know where the problem originated, the IJ or the BIA. Did the IJ determine whether the sex assault charge was disqualifying and the BIA just endorsed the IJ decision in favor of Ngoy or did the IJ decide against Ngoy and he appealed, winning at the BIA. We don’t know where the problem originated, but we do know that the BIA is part of the problem, and its decision should have been overturned by then Attorney General Barr. Of course, Attorney General Merrick Garland will not take any action. But we do know that the Deep State was working hard to protect Ngoy, and other rapists.