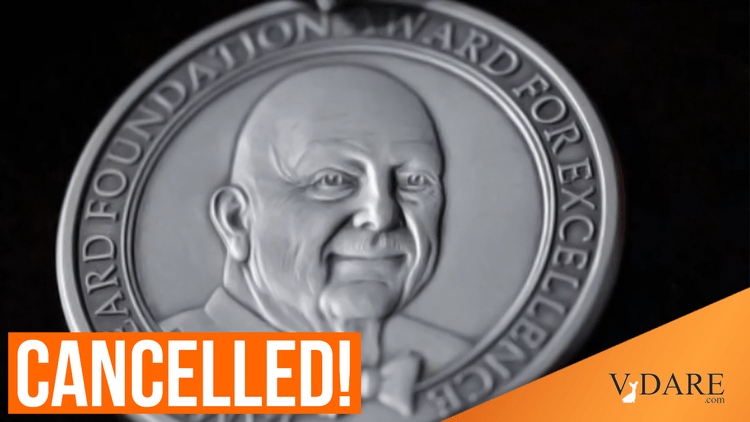 Earlier: Plaques for Blacks at the Golden Globe Awards

It’s been a tough year for people in the restaurant business, but they at least had the annual James Beard Awards to look forward to cheer them up.

Behind the Cancellation of James Beard Awards, Worries About Chefs’ Behavior and No Black Winners

The decision to put the honors, the Oscars of American restaurants, on hiatus came amid concerns about a lack of diversity and allegations against some nominees.

First, lots of nominated chefs were getting Me-Tooed by disgruntled ex-employees and ex-lovers, often over minor workplace squabbles, such as “toxic kitchen culture.” E.g.,

In July, Jessica Koslow, a Los Angeles chef, sent a letter to the foundation withdrawing as a candidate for Best Chef California. Her reputation had been bruised by allegations that she had taken credit for others’ recipes, misled city health inspectors and allowed furry lids of mold to grow on pots of jam.

… At an emergency meeting held on Zoom in late July, a foundation staff member who had seen the final voting results raised a second concern: No Black people had won in any of the 23 categories on the ballot.

This would not have been a first for the James Beard awards. The foundation and the restaurant awards committee had promised many times recently, though, to field more diverse slates of candidates. Many observers saw progress. This year, a number of Black chefs were named as semifinalists or nominees. But they had lost in the final round of voting, according to people who were briefed on the racial breakdown of the results.

“The message came through that they knew who the winners were, and the winners didn’t look like they want them to look,” said one committee member, speaking on the condition of anonymity because of concerns about violating the nondisclosure agreement everyone on the panel is required to sign. …

Those awards have long mirrored the American restaurant business itself, whose highest slopes of power and prestige have tended to be the preserve of white men cooking food mainly derived from Western Europe.