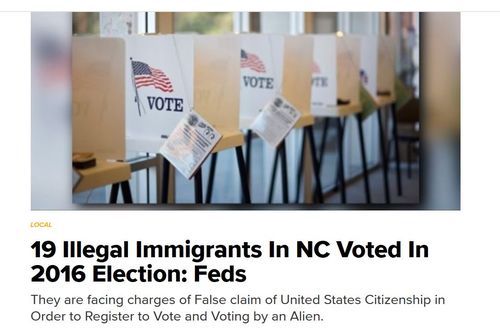 One person is currently prosecuting illegal voting by aliens in the United States. And it’s not Mr. In Charge Since Day 1, nor any of the Obama holdovers that Jeff Sessions has allowed to dominate the Trump Department of Justice.  It is Robert Higdon, United States Attorney (USA) for the Eastern District of North Carolina.

Somehow Jeff Sessions was able to find a Republican attorney to be the USA for the Eastern District, unlike the USA for the Northern District of California, which by default, has been allotted by Sessions to a left-wing Democrat activist from San Francisco, Alex Tse, who is also a close associate of leftist Oakland Mayor Libby Schaaf, who warned illegal aliens about impending raids by U.S. Immigration and Customs Enforcement (ICE), and Tse has failed to prosecute her or anyone else in that debacle.

But the Trump Republican USA Higdon, has been doing the work Jeff Sessions refuses to do: prosecute illegal voting by aliens. Note that legal as well as illegal aliens are prohibited from voting; it is both a crime and a separate deportable offense for any alien to vote.

The United States Attorney for the Eastern District of North Carolina says several of those charged voted in more than one election.

The indictments were made by a federal grand jury in Wilmington and included illegal voting in Wake, Johnston, Cumberland and Wilson counties.

USA Higdon has not rested on his laurels. He has sent Grand Jury subpoenas to 44 counties in North Carolina for voting records to uncover more illegal voting by legal and illegal aliens.

Federal immigration authorities are demanding documents from 44 North Carolina elections boards and the state Board of Elections.

The subpoenas come via the U.S. Attorney’s Office for the Eastern District of North Carolina. An Immigration and Customs enforcement agent faxed them to the county boards of election.

The subpoena sent to the county boards requests “any and all poll books, e-poll books, voting records, and/or voter authorization documents, and executed official ballots (including absentee official ballots), that were submitted to, filed by, received by, and/or maintained by the [redacted] County Board of Elections from August 30, 2013 through August 30, 2018.”

The subpoena sent to the state Board of Elections requests 8 items including “Any and all ‘Admission or Denial of Non-Citizen Return Form’ that were generated by the North Carolina Board of Elections, and/or the Ethics Enforcement Office.”

Sadly, though, USA Higdon is so far the only Department of Justice prosecutorial official to aggressively pursue the widespread problem of alien voting in the United States. Especially significant is that Jeff Sessions has not ordered USA Alex Tse to pursue a similar program in San Francisco, which openly allows illegal and legal aliens to vote in local elections.

We have been told that Jeff Sessions is the only immigration hawk in the Trump Administration, but that is obviously not true. Sessions is doing nothing to prod the various United States Attorneys throughout the United States to aggressively prosecute illegal aliens, especially when so many illegal aliens have records held by the States that will identify them and their homes, such as driver’s licenses issued by the State of California to over 1 million illegal aliens.

USA Alex Tse could easily obtain a Grand Jury subpoena for San Francisco’s ID card and voting records to identify illegal aliens who have voted or who are living in the United States illegally and are aided by the City and County of San Francisco in violation of Title 8 United States Code Section 1324. Tse could as well for the State of California driver’s license records for illegal aliens. However, he hasn’t and Sessions hasn’t ordered him to do that for one good reason, Jeff Sessions is part of the problem.

Time for Jeff Sessions to do the honorable thing, and resign. He does not have the confidence of the President.