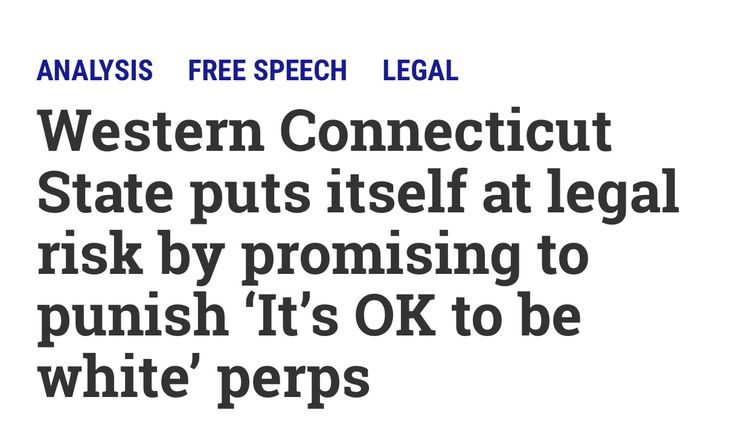 OK To Be White Persecution: "This Is How You Make White Nationalism A Thing"

Earlier: College President: "It's OK to be White" Flier Is "Despicable, Utterly Unacceptable and Disgusting." But It's OK For Him To Be White?

It's amazing to see Glenn Reynolds, who I remember from the year 2002 attacking Trent Lott for praising onetime Dixiecrat Strom Thurmond, being "radicalized" by anti-white hate. (Reynolds, a libertarian Tennesseean, was a preacher's kid during the Civil Rights era, and his father supported the actual Civil Rights movement.)

Freedom of speech is, of course, a civil right, and it's one that President John Clark [Email him] of the Western Connecticut State University  doesn't believe in it. The College Fix, in the story Reynolds is linking to, writes that:

The University of Connecticut legally endangered its administrators and police by launching a sweeping investigation to identify and arrest students who shouted the N-word in a parking lot last month.

Western Connecticut State puts itself at legal risk by promising to punish ‘It’s OK to be white’ perps, November 5, 2019

They wanted to prosecute them under Connecticut's antique "racial ridicule" law. It was passed in 1917, and was criticized here by Eugene Volokh in 2010. There's no way it's constitutional under modern First Amendment jurisprudence.

Western Connecticut State University administrators and police seem intent on following the same script, despite the pushback against UConn from the legal community.

President John Clark asked for the community’s help Friday in identifying people who distributed “hate filled flyers and inscriptions on our university property” on Thursday.

The flyers included the unadorned statements “It’s OK to be white” and “Islam is right about women,” a spokesperson told the Hartford Courant. They were “typed and printed on white paper” and “left around a residence and classroom hall” on the midtown campus in Danbury.

“I wanted to assure you that a full scale police investigation is underway,” with assistance from the FBI, state police and municipal police, Clark wrote Friday. Surveillance footage is under review and people “who may have witnessed any of this despicable and utterly unacceptable behavior” are being interviewed.

Any WCSU community members identified as involved with the flyers – whose content Clark never mentioned – “will be subject to the severest disciplinary actions, including dismissal as well as possible civil and criminal actions,” the president wrote. He was not shy about using adjectives to describe the unnamed flyers – “disgusting,” “hateful,” “virulent,” “sick and outrageous.”

The messages on the flyers “are of course fully protected by the First Amendment” regardless of how offensive they are, according to UCLA Law Prof. Eugene Volokh, a First Amendment expert who previously poured cold water on UConn’s aggressive response to the N-word shouts.

In a blog post Monday, Volokh said he confirmed with the university that the only messages concerned white people, Islam and women. It’s not even clear that the latter message was “meant (or will likely be understood) literally,” but in any case, any of the conceivable meanings of “Islam is right about women” are “constitutionally protected,” he said.

Okay, these aren't threats, they're not crime, and they don't say anything controversial. What they are is linguistic traps for anti-whites to fall into. If you condemn "It's OK to be white" you're saying it's not okay to be white, and it's not OK to say it, although blacks are always saying, and being encouraged to say "Black Lives Matter."

“Islam is right about women” is an even slyer trap. Islam's laws and practices are misogynistic in the extreme by American standards. You're not allowed to say that because it's Islamophobic.

So if you attack someone for saying “Islam is right about women”—offensive to feminists, etc.—then how do you not condemn someone who's preaching from the Koran on campus?