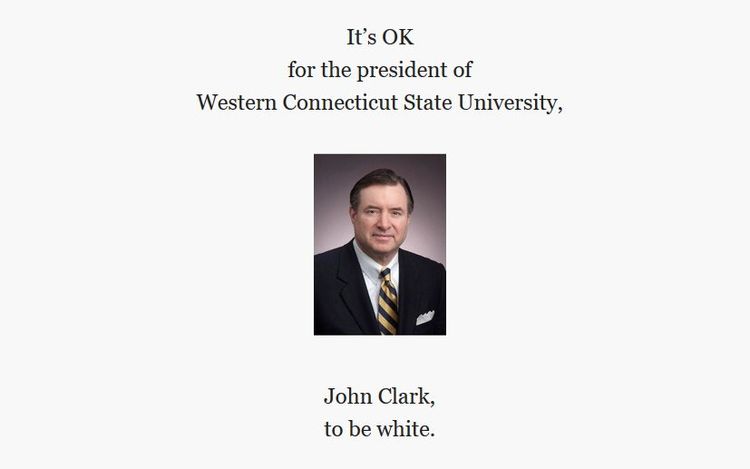 College President: "It's OK to be White" Flier Is "Despicable, Utterly Unacceptable and Disgusting." But It's OK For Him To Be White?

From the Hartford Courant:

It was not clear whether a student or “outside agitators” were responsible, but university President John Clark strongly condemned the materials and vowed to enforce the “severest disciplinary actions” regardless of whether students or someone off-campus made the flyers.

“Have no doubt that we are treating this as an attack on our university community and making every effort to see that those responsible are caught and properly punished,” Clark wrote in a letter published late Friday afternoon. “I am fully committed to the absolutely necessary goal this does not happen again. We must be ever vigilant to protect our university against these hateful attacks.”

The flyers, typed and printed on white paper, were left around a residence and classroom hall just off the WCSU main green on the midtown campus on White Street in Danbury, university spokesman Paul Steinmetz said.

One flyer read “It’s OK to be white” and the other read “Islam is right about women,” Steinmetz said.

University officials immediately reported the flyers to Danbury and state police and referred the messages to the FBI office in New Haven, all of whom were investigating who made the flyers on Friday, Steinmetz said.

Clark slammed the incident as despicable, utterly unacceptable and disgusting and promised the school would punish whoever is found responsible, including expulsion if students were involved and even criminal or civil actions in court.

“I want to state directly and without equivocation that if any member of our university community is found to be party to these revolting actions they will be subject to the severest disciplinary actions, including dismissal as well as possible civil and criminal actions,” Clark said. …

“I am both shocked and immensely saddened about this sick and outrageous behavior, especially since our university has worked so hard to be a warm, diverse and caring community for all, no matter their race, color, gender, sexual orientation/identification, disability and age,” Clark said. “All members of our community should feel comfortable, safe and secure at the university.”

Maybe somebody should now put out this flier:

It’s OK
for the president of
Western Connecticut State University, 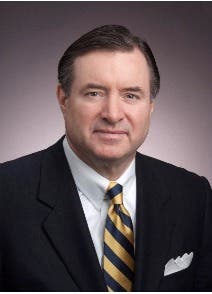 John Clark,
to be white.