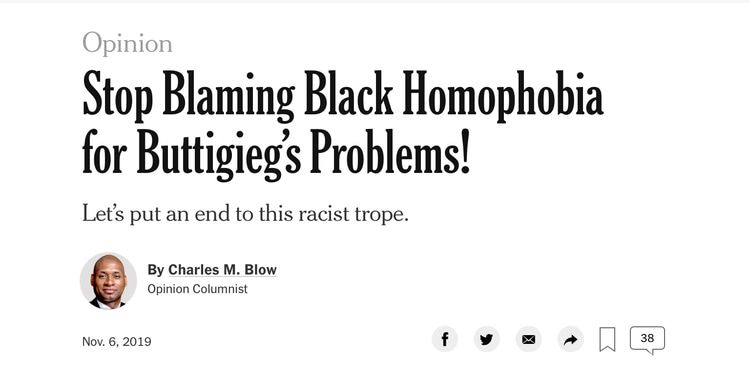 Reducing Pete Buttigieg’s struggle to attract black support solely to black homophobia is not only erroneous, it is a disgusting, racist trope, secretly nursed and insidiously whispered by white liberals with contempt for the very black people they court and need.

I have never been blind to this — the people who see black religiosity as an indicator of primitive thinking and lack of enlightenment.

(For the record, I am bisexual and not a religious man.)

They are those who see black people as a blight on our big cities, pathologically prone to violence and in need of pity and crumbs they cast about and call philanthropy….

It is tiresome and disappointing to constantly have to defend yourself not only from people who are openly hostile to you, but also from those who feign friendship but are secretly hostile to you.

It is in the tribal nature of gay culture that white men still center their white maleness as privileged, if one step removed from that enjoyed by their heterosexual brothers, where racial minorities are too often fetishized and thing-ified, seen more as an opportunity than an equal. …

And the people who are so committed to the black homophobia narrative must search themselves for the answer to this question: Why do you want — need! — this trope to stay alive?