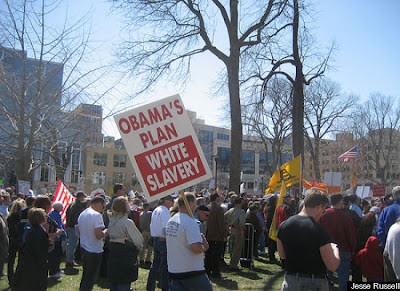 Generally at VDARE.com we have tended to see the Obamacare row as on the periphery of our interests, although Federale has kept track of the immigration aspects as in here and here and I took note of the parallel with immigration legislation recently in Defund Obamacare? The Border Fence Was as did James Fulford in You Know What Else Is "The Law Of The Land" Like Obamacare? Deportation But we do believe that demography is destiny and that America’s survival depends on the reformulation of the Republicans as the Generic American Party. So SBPDL’s blog Obamacare: The Black man chooses and the White man pays is arresting.

Obamacare is nothing more than a white-tax, an investment in the future health of non-whites at the expense of whites today (and their future)…

Earl Ofari Hutchinson, writing at the Huffington Post’s ‘Black Voices’ section, can’t contain his zeal at how Obamacare will positively impact the lives of uninsured (and incredibly unhealthy) black people [Obamacare Is a Triumph for African-Americans, 9-29-13].

Remember what Valerie Jarrett, an advisor to Obama, said at the National Association of Black Journalists (NABJ) conference in 2012, putting Obamacare under a racial microscope and revealing what the naked-eye couldn’t see:

On Saturday afternoon, Jarrett spoke with members of the Trotter Group of African American columnists and with regional reporters, and again outlined what she considered the Obama administration's successes, among them…health care reform, which she said will disproportionately help African Americans.

SBPDL could have expanded the argument to note that the Hispanic Immivasion has hugely added to Obamacare’s benefitting constituency.

This would require a slight adjustment of the conclusion

The black man chooses and the white man pays.