Peter Brimelow writes: Is Obama a socialist? At VDARE.com, we take the nuanced position that, no, he’s actually a “racial socialist”—his objective is, not the public ownership of the means of production, distribution and exchange as such, but more crudely the use of state power to shift resources from taxpayers, predominantly white, to his favored constituencies, predominantly minority and above all black.  Henry Wolff here exposes, in an article that we are privileged to cross-post with American Renaissance, how the Obama Administration’s Department of Justice reached a sweetheart settlement with compliant leftist college bureaucrats to further expropriate California’s long-suffering taxpayers, using the excuse of “hate” incidents that had been totally discredited. Of course, the model here is the Clinton Administration’s billion-dollar Pigford sweetheart settlement of patently fraudulent black farmer discrimination claims—which predated Obama, although as a U.S. Senator he did his best to keep the fraud going. And, of course, the GOP in its years in power did nothing to intervene to protect taxpayers (with the partial exception, to her great credit, of Rep. Michele Bachmann, along with our friend Rep. Steve King).

Last month, the Departments of Justice and Education ended a two-year-long investigation of alleged racism at the University of California, San Diego (UCSD), in return for a commitment by the university to spend millions of dollars on blacks and Hispanics. This is a shocking outcome. Every one of the allegedly racist incidents that sparked the investigation was either ambiguous, mischaracterized or an outright fraud.

The university and the government agencies involved refuse to discuss the agreement—no doubt because they know it will not withstand scrutiny.

Trouble started in February 2010 when a rumor spread through the UCSD campus that a white fraternity, Pi Kappa Alpha, had hosted a “Compton Cookout” at which guests were urged to dress and act like ghetto blacks. The invitation on Facebook was graphic:

Ghetto chicks have a very limited vocabulary, and attempt to make up for it, by forming new words, such as “constipulated”, or simply cursing persistently, or using other types of vulgarities, and making noises, such as “hmmg!”, or smacking their lips, and making other angry noises, grunts, and faces.

Watermelon would “of course” be served, and the invitation included the following photo: 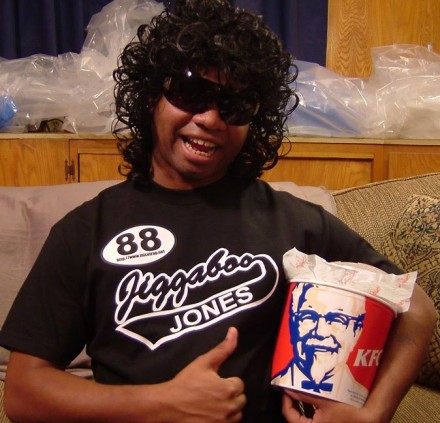 The UCSD Black Student Union led the campus in protests, and sensational headlines appeared around the country: “White Fraternity Mocks Black History Month with ‘Compton Cookout’” and “Racist Frat Boys Will Be Racist Frat Boys . . . on Facebook.” USCD Chancellor Marye Anne Fox strongly condemned the party and invited students and faculty to a teach-in “to explore how such incidents continue to occur.”

In the midst of the furor, Kris Gregorian, editor of the campus satirical newspaper The Koala, went on UCSD’s Student Run Television and mocked the black protesters, saying they should be thankful for a party thrown in their honor, and calling them “ungrateful niggers.”

The university set up a website describing its efforts to “battle hate,” and the Black Student Union (BSU) announced that the university was in a “state of emergency” and that blacks “do not feel safe on their own campus.” The BSU issued a list of 32 demands, including required courses in ethnic studies and changes in admission policies.

About 200 students, most of them black, insisted on a meeting with administrators, including Chancellor Fox, to present the demands. She accepted some demands on the spot, but students interrupted her repeatedly. One waved his finger at her, saying “All you’re doing is standing there and looking dumb.” 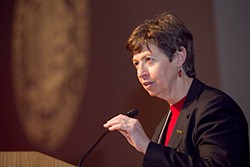 Thousands of students attended the university-sponsored teach-in, but after about an hour, BSU students complained that race problems could not be solved by a two-hour teach-in, and ordered everyone out of the hall. The vast majority left the building for a more radical rally to rail against “institutional racism” at the university. 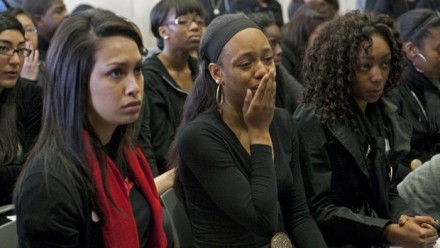 BSU Students At A Complaint Rally

Later that week, someone found a noose hanging in the campus library. The chairman of the University of California board of regents called it “a despicable expression of racial hatred.” Chancellor Fox denounced what she called “an abhorrent act.” Campus spokesman Rex Graham said the incident was being investigated as a possible hate crime committed “with the intent to terrorize.” Even California Governor Arnold Schwarzenegger condemned what was happening at the university as “intolerable acts of racism and incivility.” [Governor Condemns ‘Intolerable Acts of Racism’ at UCSD, NBC San Diego, February 28, 2010]

Hundreds of students again marched on Chancellor Fox’s office. She promised that hate would not be tolerated and that criminal acts would be punished, but students occupied her office anyway.

A fourth incident was reported on March 1, when someone put a hood on a statue of Theodore Geisel (better known as Dr. Seuss), and placed a rose between his fingers. The hood, which appeared to be made from a pillow case, had a hand-drawn cross inside a circle on it. UCSD called it “KKK-like,” and campus police promised to take fingerprints and do DNA analysis. The U.S. Attorney General and the FBI started investigations. [Mysteries of UC San Diego: The Pillow Case-and-Rose Atrocity, the Disappeared "Follow-Up," and the Non-Existent "Task Force" By Nicholas Stix, April 1, 2010]

But what had actually happened on campus? The Compton Cookout, which started the uproar, was not a campus event at all. On February 18, two days after the first media reports, a black comedian named Nipsey Washington, who is not a UCSD student and who goes by the name of “Jigaboo Jones,” posted a video on YouTube explaining that he organized the event to promote a DVD. He said Pi Kappa Alpha had nothing to do with it, adding, “Y’all Fox and ABC and all that, get your facts straight.” Later, he complained that black students were “marching and protesting about a damn lie.” He was the man in the photo in the invitation to the cookout.

There have been hundreds of news stories about the “racist,” white-organized Compton Cookout, but despite Pi Kappa Alpha’s denial, and Mr. Washington’s attempt to set the record straight, virtually no one has reported the truth.

The noose incident was not a “despicable act of racial hatred” either. A non-white woman came forward and said she and a friend had found a piece of rope, tied a lasso and then a noose, and then left it on a desk in the library. She went to the police to explain that the noose “was not an act of racism” and that she sympathized with the protestors. The police accepted her explanation but did not reveal her identity. The university suspended her.

As for the hood on the statue, the campus police, the FBI, and the US Attorney all seem to have learned nothing, but will not say so specifically. The campus police will say only that putting a hood on the statue “was not a criminal act,” and that there appeared to be no connection between the hood and the noose. They will make no documents available about their investigation.

But what about The Koala, and Mr. Gregorian’s complaint about “ungrateful niggers”? The Koala is well-known for its irreverent content and for testing the limits of free speech. According to Wikipedia, “Nearly all of The Koala's writing involves making fun of a race, ethnicity, religion, group, people with disabilities, sex, or sexual orientation, as well as recent national tragedies.” Mr. Gregorian himself noted that The Koala’s “express goal is to offend every group possible,” adding that “there’s no point in having rights if you can’t use them.”

A spokesman for Student Run Television pointed out that Mr. Gregorian’s appearance “was not too different from typical Koala fodder.” Just months earlier, The Koala came under criticism for mocking a student’s death in a pole-vaulting accident. The paper also published An Entertainment Magazine for the Islamic Man that included an illustrated article called “The Jizzlam Guide to Sexual Positions During Prayer.” Before editing The Koala, after the 9/11 attacks, Mr. Gregorian went around with a sign saying “Will work for box cutters.”

Mr. Gregorian was simply exercising his usual bad taste, and was not disciplined by the school. He certainly did not reflect a campus climate of “racial hatred.”

What have been the results two years later? In April, UCSD signed a “Resolution Agreement” [PDF] with the Department of Justice (DOJ) and the Department of Education (DOE), bringing the two-year investigation to an end, and promising measures that will cost California tax payers millions of dollars.

This is just a partial list of what the university had already done in order to end the investigation:

The university promised to keep doing these things, and also to train all freshmen in how to avoid discrimination and harassment. The university also granted DOJ the right to sue if UCSD does not keep its promises.

The agreement was widely described as “voluntary,” but the DOJ agreed to “refrain from initiating litigation regarding . . . alleged incidents of racial discrimination and harassment at UCSD . . . .”

Incidents of racial discrimination? In its press release about the agreement, the DOJ cited the same discredited incidents: “multiple incidents of racial harassment on campus, including public displays of nooses [there was only one noose] and a Ku Klux Klan-style hood, and the hosting of an off-campus party where students were invited to dress as stereotypes of African-Americans.” In its account of the agreement, the Los Angeles Times even invented “incidents of . . . students wearing KKK-style hoods.” [U.S. ends probe of racial bias at UC San Diego, By Tony Perry, Los Angeles Times, April 14, 2012]

The DOJ’s press release claimed it “received additional complaints of discrimination and harassment” during the investigation, but did not name them and refuses to talk about them.

In fact, UCSD, DOE, and DOJ have built a wall of silence around this absurd agreement. Thomas Perez, Assistant Attorney General for civil rights, boasted about the agreement when it was signed, but refused to speak to this reporter. Russlynn Ali, DOE’s assistant secretary for civil rights, issued a self-congratulatory press release, but would not speak. DOE and DOJ public affairs officers all refused comment.

UCSD’s promise to spend what will amount to millions of taxpayer dollars in response to phony “racist” incidents comes at a time of massive budget cuts. Last year, the university announced it would close four campus libraries and liquidate 150,000 books and journals. The medical center library has already been shut down and the Scripps Institution of Oceanography was to be shuttered this year. In 2011, UCSD lost three leading cancer researchers to Rice University, which offered them 40-percent pay increases. At the same time, UCSD increased tuition by nearly 18 percent to offset state funding cuts.

Which is more important: the medical center library or dedicated space on campus for the Black Student Union and MEChA? Cancer research or a special Office for the Prevention of Harassment and Discrimination?

UCSD’s capitulation to minority-student bullying and its inability to defend itself against baseless charges of racism is a disgrace. And its so-called settlement agreement with the government is an insult to the taxpayers and students of the state of California.