Obama Trusts Boehner to Be His Amnesty Poodle

Leave it to Speaker Boehner to rescue the President from the worst political fiasco in a century (Obamacare) by working to hand him the biggest win for the Democrats since the 1986 amnesty that flooded America with millions of Third Worlders who prefer big government. 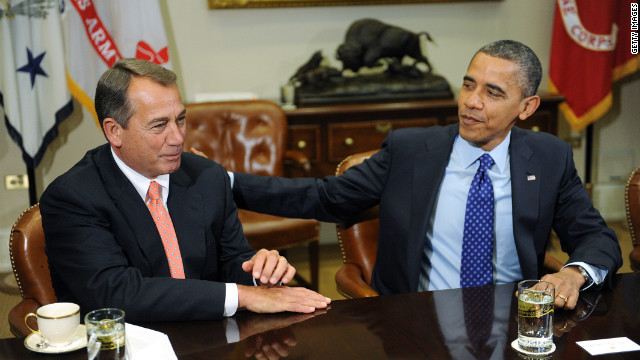 Signs from the GOP House leadership are bad. After promising in November that he wouldn’t conference on the Senate’s vile amnesty bill, Boehner hired an amnesty legislative expert for his staff the following month. Bob Goodlatte, the Chair of the House Judiciary Committee, declared on Spanish-language TV last week that he supported the legalization version of amnesty, in which the lawbreaking foreigners get their highly desired work permits but not citizenship (a snoozer for illegals) — that’s what passes for law enforcement these days in the debased capitol city.

Now we hear that Obama is confident that his pal Boehner will save his failed Presidency with the amnesty so beloved by political consultants and Democrats.

Obama believes Republicans will feel politically vulnerable, if they fail to advance the issue, a high priority among Hispanic voters, according to Democratic senators who met with the president this week.

Obama sees immigration reform as a source for optimism in what has otherwise shaped up as a tough year for Democrats.

“He predicted the House would pass something this year,” said Sen. Tim Kaine (D-Va.), who attended the meeting.

Obama cautioned senators to brace themselves for difficult negotiations with House Republicans later this year.

“He said we’re then all going to have a challenging conversation,” Kaine added. “He said it was more likely than not the House would do something.”

Sen. Charles Schumer (D-N.Y.), the lead sponsor of the Senate-passed immigration bill, described Obama as “cautiously optimistic” after the meeting.

“I think our Republican colleagues realize that to be blocking immigration reform is not good for them,” Schumer added.

Boehner has made several recent moves giving Obama and his Democratic allies hope, such as hiring Rebecca Tallent to serve as his new director of immigration policy. She previously worked for Sen. John McCain (R-Ariz.), a co-sponsor of the Senate immigration bill.

Boehner plans to unveil a set of Republican principles for immigration reform before Obama’s Jan. 28 State of the Union address.

He and House Majority Leader Eric Cantor (R-Va.) told House colleagues at a closed-door meeting early this month immigration reform would be a priority in 2014.

“The path will likely be a legalization bill that offers a path to citizenship through existing channels,” said the aide.

Senior Republicans, such as Rep. Darrell Issa (Calif.) and Rep. Mario Diaz-Balart (Fla.), are working on plans to grant legalization through existing channels, such as H-1B visas, agricultural worker permits and family connections.

Issa, however, expressed pessimism earlier this year that immigration reform could pass before 2015 because of the partisan atmosphere in Congress.

House Republicans have signaled they would not support any proposal that creates a special path to citizenship for millions of illegal residents. House conservatives rejected the Senate bill because it includes a special 13-year pathway.

Left-leaning advocates of immigration reform say a proposal that would use existing processes to grant citizenship to a greater number of immigrants could serve as a viable alternative.

“Yes, with the provision that the existing channels are large enough,” said Brent Wilkes, national executive director of the League of United Latin American Citizens.

“The analogy would be, if you have a crowded store, and the fire marshal says you have to create a new exit or enlarge the existing one, but the bottom line is everyone has to get out,” he said.

Boehner has stipulated the House would not act on a comprehensive bill but instead pass a series of measures.

Sen. Marco Rubio (R-Fla.), a co-sponsor of the Senate bill, says enacting a pathway to citizenship for illegal immigrants is far from a slam dunk, but he believes the House could build up momentum by passing a series of piecemeal bills.

Wilkes said that would be acceptable to proponents of comprehensive reform, as long as the House addresses each of the areas covered by the Senate legislation.

“These things may sound arbitrary, but they give different members in tough districts the ability to vote against different parts of immigration reform,” he said. “If some members need to take a walk on certain aspects of it, House leaders will let them do it.”

Obama expects these bills would add up to a series of reforms that could then be negotiated with the Senate.

“He feels good. He thinks we’re going to be able to get something on immigration,” said a Democratic senator who met with Obama at the White House Wednesday. “He just thinks that Republicans are not going to want to be hanging out on that.”

The lawmaker requested anonymity to discuss the private meeting.

Senate Republican Whip John Cornyn (Texas), the former chairman of the Senate Republicans’ campaign arm, thinks the GOP could probably succeed in the 2014 election without passing immigration reform but would face problems in 2016.