The front page of Wednesday’s Los Angeles Times had a truly dispiriting message, namely that just a couple years after a record drought, California has done nothing to store water during a rare rainy winter. In fact, much of the precious water is being dumped into the ocean with little attempt to capture it. 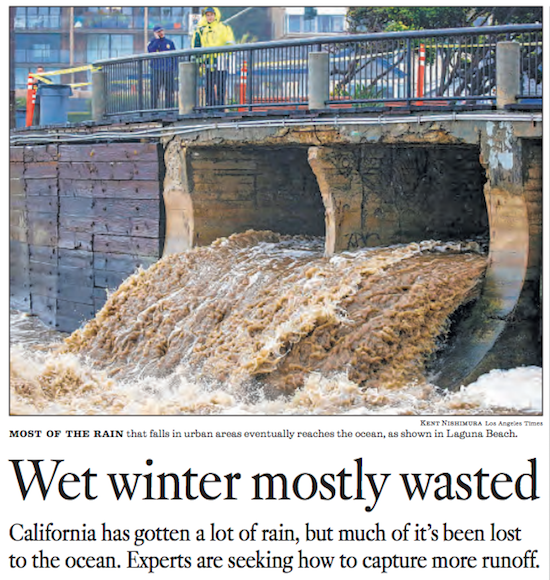 A headline from 2017 read California’s Five-Year Drought Was Worst in Nearly 450 Years for Some Areas, Records Show. But memories are short in certain quarters.

The state is totally run by Democrats, who often claim that they are environmentalists, but when it comes to important policies like population growth and water conservation, they do nothing.

Below, the drought-stricken Lake Oroville (which is also a reservoir) was nearly empty in September 2014. 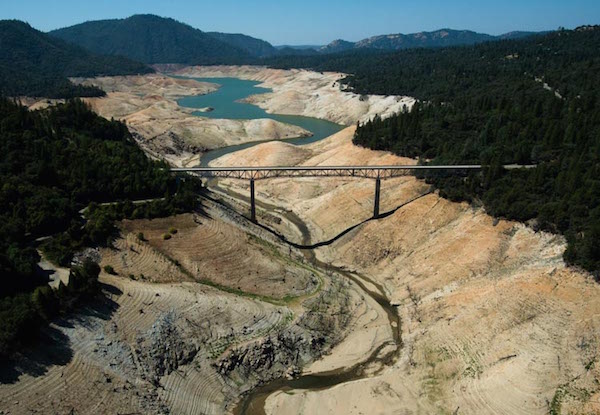 California has gotten so much rain, but most of it has been wasted, Los Angeles Times, February 20, 2019

California’s wet winter has dumped at estimated 18 trillion gallons of rain in February alone. But much of it is simply going down the drain.

In what has become a source of much concern in a state prone to droughts and water shortages, the vast majority of rainwater in urban areas flows into storm drains and is eventually lost to the Pacific Ocean.

“When you look at the Los Angeles River being between 50% and 70% full during a storm, you realize that more water is running down the river into the ocean than what Los Angeles would use in close to a year,” said Mark Gold, associate vice chancellor for environment and sustainability at UCLA. “What a waste of water supply.”

For Southern California, this is shaping up to be the wettest winter in years — serving as a reminder of how much water is wasted when the skies open up.

Local agencies did step up water capture efforts after the region’s most recent drought, but officials admit it’s going to take time and a lot of money to save the significant amounts of rainwater now being lost.

Climatologist Bill Patzert estimates that more than 80% of the region’s rainfall ends up diverted from urban areas in Southern California into the Pacific.

“All those trillions of gallons of rain, which sound so sweet, really end up in the ocean,” he said. “There are some catchment basins, but it’s been so dramatically dry for the past two decades that it’s not filling them up. Roots and soil are sucking up the water and preventing it from getting to the groundwater basins.”

The storms have significantly boosted the snowpack in the Sierra, which is a major source of California’s water. As the snow melts, it’s collected in a series of rivers, dams and reservoirs and sent to farms and cities. [. . .]

“In the short term, this rain is certainly sweet and we were overdue, but it took us years to get into a drought situation. And during those years, there’s been tremendous population growth, so there’s no quick fix for the underground drought,” Patzert said. “Conservation is forever now. It’s a new lifestyle.”