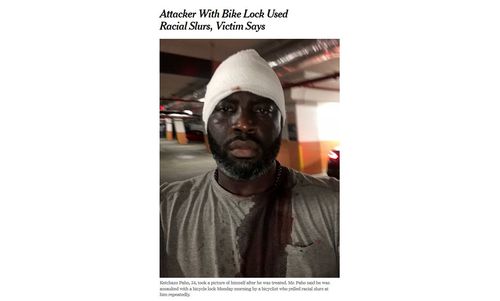 NYT: Who Needs Rule of Law When We've Got "Who? Whom?"

Unlike that incredibly boring 150-word non-story about college philosophy of ethics instructor Eric Clanton getting no jail time for smashing seven Trump supporters on the head with his bike lock in sneak attacks, the New York Times is fascinated by this bike lock story (778 words): 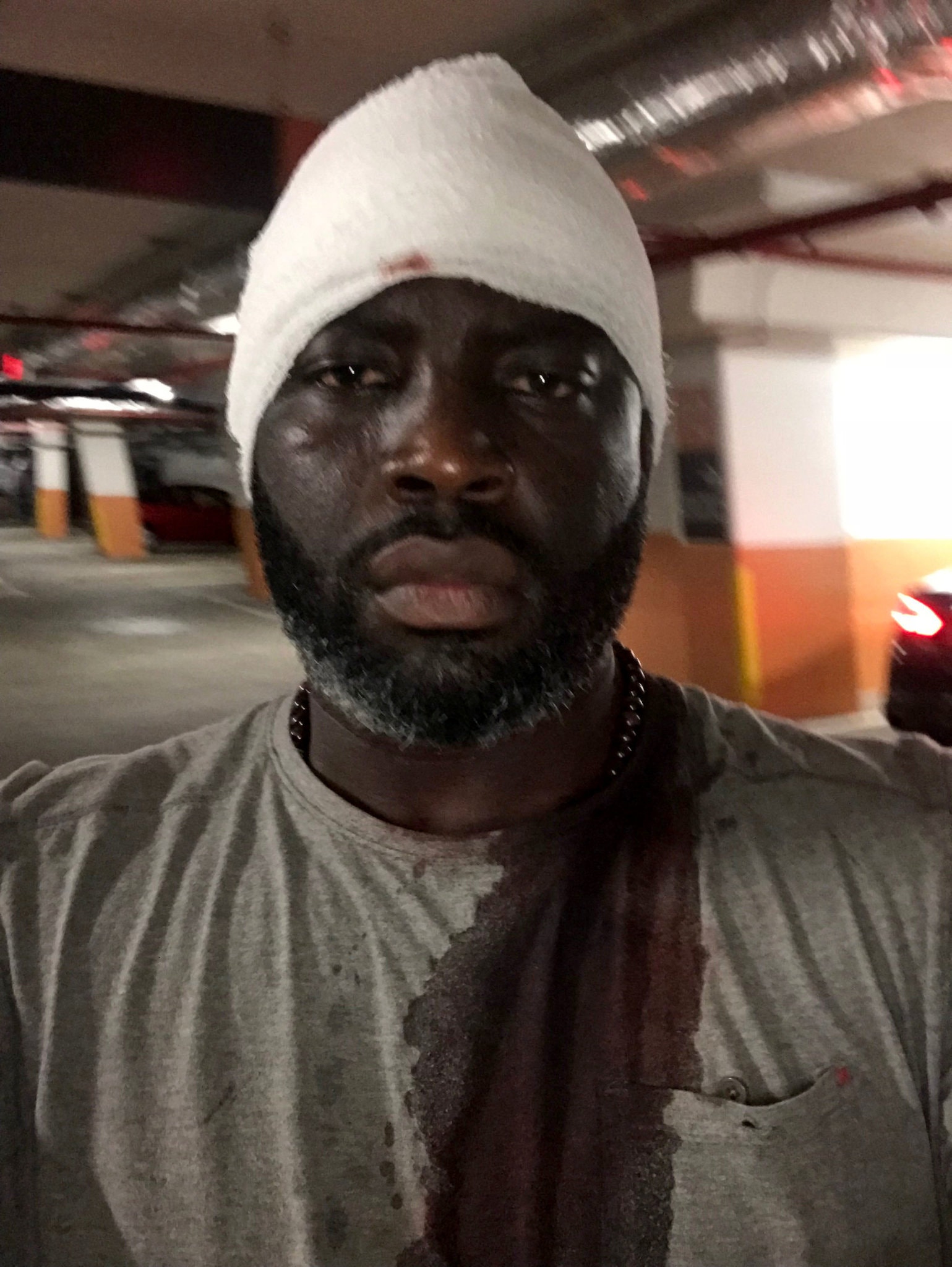 Ketchazo Paho, 34, took a picture of himself after he was treated. Mr. Paho said he was assaulted with a bicycle lock Monday morning by a bicyclist who yelled racial slurs at him repeatedly.
By Melissa Gomez
Aug. 8, 2018

As Washington braces for a “white civil rights” rally and counter-protests, the police are investigating an attack in which the victim says a cyclist hurled racial slurs and hit him with a bike lock.

The victim, Ketchazo Paho, 34, of Maryland, said he was driving through Georgetown on his way home early Monday when he was assaulted by the bicyclist who struck him in the head with the metal lock.

In case you are wondering, that was more than 48 hours before the announcement of no jail time for Eric Clanton for hitting 7 Trump supporters over the head with his bike lock.

Mr. Paho said he fears similar attacks could happen this weekend amid plans for a “Unite the Right” rally and counter-protests this weekend.

The Metropolitan Police Department arrested a white suspect, Maxim Smith, and charged him with one count of assault with a dangerous weapon. The police said they were investigating to determine if the crime was motivated by hate or bias.

Mr. Smith, 24, was being held in jail pending a preliminary hearing scheduled for Thursday morning. It was unclear who would be representing him.

Mr. Paho, who is black, said that racial slurs had been slung at him before.

“What happened to me Monday is not foreign,” he said, though he added that slurs had never escalated to an attack before. With the “Unite the Right” rally coming up this weekend, Mr. Paho said he wanted members of minority groups to be aware of the dangers the protest could bring.

The Washington Post has a more relevant and plausible account of what happened: a stupid road rage encounter at 1 am.

Meanwhile, here’s the New York Times’ account of a black man killing a white man in New York this week:

An assistant basketball coach at Wake Forest University was arrested Thursday in New York City after a man the police say he punched in Queens over the weekend died of his injuries.

The victim, Sandor Szabo, 35, of Florida, fell onto the pavement and lost consciousness after he was punched in the face during a confrontation just after 1 a.m. Sunday in Long Island City, the police said. After Mr. Szabo fell, security footage showed his attacker walking away, and the police said he left the scene in a white sport utility vehicle. …

The Associated Press, citing a person familiar with the investigation, reported that Mr. Szabo might have been banging on car windows just before the confrontation.

The man who was arrested, Jamill Jones, 35, who lives Kernersville, N.C., turned himself in on Thursday to face a charge of misdemeanor assault. Mr. Jones pleaded not guilty and was released on his own recognizance, said Alain Massena, his lawyer.

The investigation was continuing, and there could be additional charges as a result of the death. …

In May 2017, Mr. Jones, who is from Philadelphia, became an assistant to Danny Manning, the head men’s basketball coach for the Wake Forest Demon Deacons. “He is a well-respected bright mind in our profession,” Mr. Manning said in a statement at the time.

On Thursday, Wake Forest Athletic Communications said in an emailed statement that it had “just been made aware of this matter” and was still “gathering information.”

A statement from the Jones family, provided by Mr. Massena, offered condolences to the Szabo family.

“It is our sincere hope that this matter not be tried in the court of public opinion,” it added. “The Jones family stands by Jamill, and his legal right to be presumed innocent in what is, ultimately, a tragic incident. Jamill Jones is a wonderful son and father — a good-hearted man who protects his loved ones from harm.”

For some reason, in reporting this story, the New York Times doesn’t find it relevant to mention all the recent Black Lives Matter terrorism, such as the Dallas Massacre.

Leaving aside the New York Times’ spin, this killing sounds like a photographic negative of the bike lock fight in Washington: guys in the wee hours of the morning reacting violently to other guys being obnoxious, with no planning aforethought. The basketball coach very likely didn’t mean to kill the (probably drunk) guy banging on his car, just as the white cyclist who hit the black motorist with the bike lock is lucky he didn’t accidentally kill him.

Both of these sad incidents are quite different from what Eric Clanton did, which was to intentionally bring his bike lock and mask to a street demonstration in order to stage multiple sneak attacks that could have killed someone on random people he didn’t like for political reasons.

As I said a couple of days ago:

I guess I’m just some kind of nutjob extremist, but shouldn’t we have rule of law rather than “Who? Whom?” Justice where a designated Who with the right (left) politics gets to hit unpopular Whoms with the wrong (right) politics over the head with his bike lock?