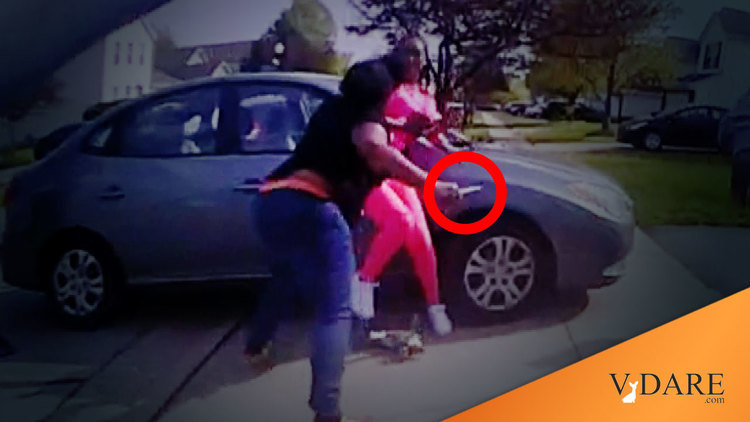 NYT: We Are Not Going To Let Knife Girl Go

From the New York Times news section on Saturday:

It’s More Than Just Tragic’: Ma’Khia Bryant and the Burden of Black Girlhood

The fatal shooting of a 16-year-old in Columbus, Ohio, highlights the different standards that young Black girls are held to.

“Ma’Khia Bryant was a child.”
— Brittany Cooper, the author of “Eloquent Rage”

It happened in a matter of seconds.

Body-camera footage shows Officer Nicholas Reardon, who was responding to a 911 call, arriving at a chaotic scene, with several people engaged in a heated fight, outside Ms. Bryant’s foster home.

As the officer gets out of his vehicle, Ms. Bryant is seen lunging at a woman with what appears to be a knife in her hand. Then, seconds later, in the frenzy and chaos, she lunges at another woman.

“Hey! Hey!” Officer Reardon says as he pulls out his gun. “Get down! Get down!”

The Ohio Bureau of Criminal Investigation is conducting a third-party investigation. And some experts, after watching the footage, have pointed out that Ms. Bryant was armed and seemed to be acting erratically, deeming the use of deadly force justifiable.

But the timing of the shooting — on the same day that the former Minneapolis officer Derek Chauvin was found guilty of murdering George Floyd last May — underscored, for many, the incessant drumbeat of police brutality and systemic racism.

In other words, to all you bad people who watched the video multiple times and are amazed at Officer Nick “O’Time” Reardon’s white coolness in making the right decision amidst black violent chaos, well, that’s not part of The Narrative.

Ms. Bryant’s young age — so evident in her giggly TikTok videos, dancing and doing her hair like any teenage girl — also highlights the unique burden of Black girls: In media coverage, Ms. Bryant has consistently been referred to as a woman, and her behavior and her body size have been scrutinized to suggest that she presented a large, uncontainable threat to everyone at the scene.

Actually, I think it was her 8-inch knife that attracted the most comment.

“Ma’Khia Bryant was a child,” Brittany Cooper, author of “Eloquent Rage,” said on MSNBC on Thursday. “The way that she has been talked about — because she is a big girl — people see her as the aggressor. They don’t see her humanity. They have adultified her.”

Because of layers of gendered racism, adults tend to view Black girls as more threatening, more aggressive, more mature and less innocent than white girls of the same age,

Especially when they are trying to disembowel other girls with a big knife.

robbing Black girls of the freedom to be children

In particular, the freedom to be children slashing with giant knives at other children.

, according to a 2017 report by the Georgetown Law Center on Poverty and Inequality.

The report found that Black girls as young as 5 years old are held to adultlike standards and, in turn, receive harsher punishments for their behavior: Black girls are more likely to be suspended or arrested at school than their white peers

Surely, you knew many Beckys and Karens at your suburban white bread school who lashed out with blades at the other girls? But how many white girls got in trouble each year for attempted murder?

often for minor infractions, like using their cellphones or throwing tantrums. In another report by the same researchers, one girl recalled that in elementary school, during a game at recess, she had thrown a ball and it had hit another girl in the face. She was then accused of assault and battery. Others shared that if they spoke up in class, they were labeled sassy or outspoken, while their white peers were seen as intelligent.

Though Black boys also face the same adultification bias, the experience of Black girls has been and still is largely overlooked.

To unpack these issues, In Her Words caught up with Dr. Jamilia Blake, a co-author of the Georgetown Law Center on Poverty and Inequality report and a psychology professor at Texas A&M University, and Dr. Monique Morris, executive director of Grantmakers for Girls of Color and author of the book “Pushout: The Criminalization of Black Girls in School.”

Let’s take an example of a black girl going absolutely berserk with homicidal rage and make it into yet another example of how white people, who are the only people in the world who ever do anything, misperceive blacks as tending to be more violent than, say, Brahmins.

The conversation has been edited for length and clarity.

Let’s start with adultification bias. What does it mean, and how does it manifest in schools or interactions with law enforcement?

Jamilia Blake: When Black girls are not seen as children, that’s adultification bias. They’re not seen as being innocent; they’re not seen as needing nurturing; they’re seen as more adultlike, and what it is, is dehumanization. Black girls are not afforded the same freedoms that are guaranteed in childhood, like exploration, the ability to make mistakes or the benefit of the doubt. How it looks in school is this general perception of Black girls’ behavior being very volitional and menacing, and even more so if they voice their concerns and raise awareness — everything that they do is kind of seen as problematic. They are constantly monitored, they receive more severe disciplinary actions, and they aren’t even able to be sad or cry. And I don’t think many educators, law professionals, mental health professionals and individuals who interact with children are even aware of it — I don’t think they know that the adultification bias may be driving the punitiveness and the severity of their responses to Black girls.

Monique Morris: Adultification bias is also age compression. This is a way to erase the normal adolescent behavior and development that we have come to associate with young people, and it heightens our propensity to respond to young people as if they’re fully developed adults — referring to girls as women, not allowing them to make mistakes, even how we define their responses to conditions. So when there are things that negatively impact them and they speak up against it, we as adults associate this Black girl behavior with some of the same tropes and stereotypes that have plagued Black womanhood for centuries. Their way of responding and defending themselves is read to be combative, and their way of challenging structures of oppression are deemed to be aggressive. That leaves very little opportunity for us to really think about the prevalence of trauma in their lives.

Right, and the very harmful “angry Black woman” trope is always in the wings …

MM: Exactly. And sometimes people think about the emotions as mutually exclusive — like you can’t express anger and also be victimized by systems of oppression.

Clearly, what Ma’Khia needed was to express her emotions even more. Don’t just try to murder girls with a knife when an axe would let you express your feelings more fully.

We have to really think about the host of environmental conditions as part of the tapestry shaping their life outcomes — to strip them of this context facilitates the adultification bias and, in many ways, reduces the institutional capacity to be responsive.

JB: Right, exactly. The ability to express a range of emotions, whether that’s in response to oppressive conditions or not, is a function of being human. So what is happening to Black girls and children is that we’re robbing them of the essential aspects of what it means to be a human being.

What were your thoughts when you watched the body-camera footage?

JB: For me as a mother — I have a 16-year-old — whenever videos of these incidents come out, I wait a significant amount of time to watch it because I don’t want to see the loss of life of another young Black person for something senseless. It really tears away at your soul. At any given time, that could have been me; that could have been my daughter, my niece or any of the girls that I work with. So when I did see the video, I saw someone who just reacted and didn’t take a lay of the land in terms of what was happening, didn’t ask questions, didn’t try to interrupt the fight.

MM: You’re not alone — I took my time to watch it, too, and originally I was not going to watch the video. We have seen so many cases, and it’s retraumatizing to watch this footage over and over. I also have a teenage daughter, a 17-year-old, who has had a pretty strong reaction to the way the media has covered this shooting — showing, for example, snippets and clips from the footage without issuing trigger warnings. This routine display of violence, in this way, also contributes to that dehumanization and adultification of our young people as they have to absorb all of this and also function as if everything is normal.

All the foster care professionals and others who work with girls who I’ve spoken to have said that they, as non-police officers, have been able to disarm girls with a knife engaged in a fight without shooting someone.

I’ve done that, many times. Who hasn’t disarmed a homicidal girl with a melee weapon?

Will Your Knife Defense Strategy Get You Killed? via @ https://t.co/B2SZrtbFft