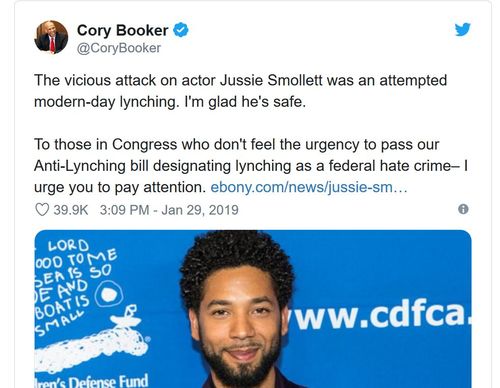 Jussie Smollett, one of the stars of the Fox television show “Empire,” was attacked in Chicago early Tuesday morning by two people who yelled racial and homophobic slurs and wrapped a rope around his neck, according to the police, who said they were investigating the incident as “a possible hate crime.”

Smollett, who is black and publicly came out as gay in 2015, was walking on a downtown street when two people approached him and yelled the slurs, according to a statement from the Chicago Police Department. The attackers then began hitting Smollett in the face and poured an “unknown chemical substance” on him.

One of the attackers also wrapped a rope around Smollett’s neck before the duo fled.

“Given the severity of the allegations, we are taking this investigation very seriously and treating it as a possible hate crime,” the police statement said. …

In a follow-up interview later in the morning, The Sun-Times reported, Smollett told the police that the attackers yelled “this is MAGA country,” a reference to President Trump’s campaign slogan.

The newspaper also reported that the F.B.I. was looking into a letter sent to Fox offices in Chicago last week that contained threatening language toward Smollett and a white powdery substance.

You know, it could have happened.

It didn’t get really cold in Chicago until about 6 am on Tuesday. It was a balmy 6 degrees in Chicago at 2 am, perfect weather for the marauding gangs of Trump voters who routinely roam the Loop hoping to recognize black gay actors from their favorite hip-hop soap operas to lynch.

Seriously, this one is so absurd-sounding … that I’m wondering if it might not be true. Perhaps this will be the one where everybody sensible finally begins to use the term “hate hoax” and then, voila, two white fraternity boys from Lake Forest in MAGA caps are arrested and confess that Smollett’s tale is the exact truth. And then the events become as famous as Emmett Till and 65 years from now we will be hearing about it over and over.

Speaking of fools rushing in, leading Democrats stampeded to announce their complete confidence in the details of Smollett’s story.

.@JussieSmollett is one of the kindest, most gentle human beings I know. I’m praying for his quick recovery.

This was an attempted modern day lynching. No one should have to fear for their life because of their sexuality or color of their skin. We must confront this hate.

To those in Congress who don't feel the urgency to pass our Anti-Lynching bill designating lynching as a federal hate crime– I urge you to pay attention. https://t.co/EwXFxl5f2m

The racist and homophobic attack on Jussie Smollett is a horrific instance of the surging hostility toward minorities around the country. We must come together to eradicate all forms of bigotry and violence. https://t.co/2accVEJrCG

Racism, homophobia, & all forms of bigotry & hate have no place in this country. The fight for equality isn’t over – no one should have to live in fear of being beaten on the street because of who they are. https://t.co/CF0G95CkTc

What happened today to @JussieSmollett must never be tolerated in this country. We must stand up and demand that we no longer give this hate safe harbor; that homophobia and racism have no place on our streets or in our hearts. We are with you, Jussie. https://t.co/o8ilPu68CM

You know, potential Presidential candidates, it’s not all that difficult to phrase a tweet to express concern and condolences and a burning desire for law enforcement to get to the bottom of this, without publicly committing yourself as a True Believer. In the above examples, Elizabeth Warren probably came closest to maintaining some dignity if this turns out to be another Hate Hoax.

So far, Beto O’Rourke hasn’t tweeted about Smollett but has tweeted in support of the five Houston cops who got hurt in a shootout with drug dealers:

My thoughts are with the injured officers and the Houston Police Department. https://t.co/USc8MY7V5R

Smollett’s Twitter account isn’t that interesting, other than he seems very busy promoting an album and music tour along with some charity work. But there was this:

Depression is a real thing y’all. You’re not crazy. Maybe just a little wounded. But we can’t get comfortable in that space. Let’s keep digging alright? Cool. 💪🏾❤️

And then there is this:

Shut the hell up you bitch ass nigga. You will continue to run this country further into the ground and risk lives every time you breathe. You’re not the president. Just a dumpster full of hate. FOH. Sick to my stomach that literal shit currently represents America to the world. https://t.co/qoNWllmZIm