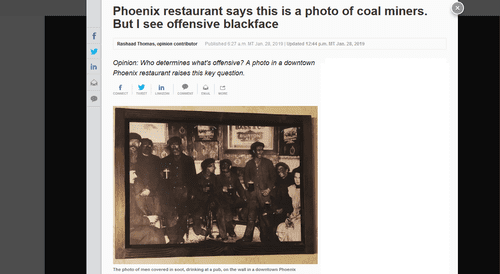 From AZ Central’s opinion page (note the writer is just a random contributor, not a big name pro):

Opinion: Who determines what’s offensive? A photo in a downtown Phoenix restaurant raises this key question.

A few weeks ago, I attended a holiday party at a downtown Phoenix restaurant. I walked around to view the photographs on the wall.

Then a photograph caught my attention.

I asked the waitress to speak with a manager. Instead, I spoke with a white restaurant owner. I explained to him why the photograph was offensive. Evidently, someone else had made a similar comment about the photograph before.

Yet, the photograph remained on the wall. He said he would talk to the other owners and get back to me. While leaving, I asked him had he spoke with the other owners. He had not spoken with them, but mentioned Google said it’s coal miners after work. …

For me, the coal miners disappeared and a film honored for its artistic merit, despite being the most racist propaganda films ever, D.W. Griffith’s “Birth of a Nation” (1915) surfaces, in which white actors appeared in blackface. The white owner saw coal miners in the photograph. Therefore, it was not offensive. …

That photo tells me I’m not welcome …

At the downtown Phoenix restaurant, my concern that the photograph of men in blackface was a threat to me and my face and voice were ignored.

A business’ photograph of men with blackened faces culturally says to me, “Whites Only.” It says people like me are not welcome.

Rashaad Thomas is a husband, father, a veteran of the U.S. Air Force, poet and essayist. Reach him at rashaadtthomas@gmail.com.