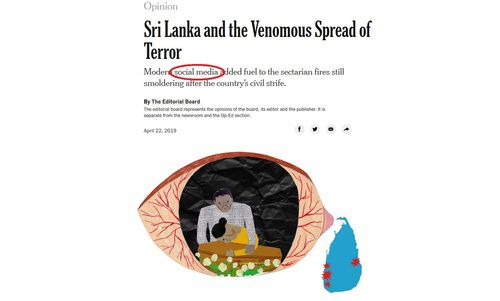 There’s a lot we still don’t know about the Easter Sunday attacks in Sri Lanka, a coordinated carnage by suicide bombers in churches and hotels that ended the lives of at least 290 innocents. A little-known Sri Lankan Islamist group has been blamed, but the motive is not yet clear.

I don’t know who did it, but I do know whom it was done to, but that’s a secret the NYT Editorial Board won’t divulge to its readers.

But those are details. In reality, we do know. We’ve seen it all, again and again — in Christchurch, Kabul, Paris, New York and far too many other places to list; in churches, mosques, synagogues, schools and squares. …

On the surface, the Easter attacks had a different local plot than the civil war — the latter was fought along ethnic lines while the attacks were apparently sectarian. But generations reared in violence are likely to have it in their blood,

as the New Irish Republican Army, radical heir to republican paramilitaries of Northern Ireland’s long sectarian feud of decades past, demonstrated last week during riots in which the police suspect that a member shot dead a reporter.

…The two mosques in New Zealand and the Tree of Life synagogue in Pittsburgh were shot up by white nationalists; the motive for the deadliest mass shooting in United States history by a lone shooter, the Las Vegas massacre in 2017, remains a mystery.

But there are common denominators, and one encountered ever more frequently is hatred spread over social media.

Why don’t we just abolish Social Media and go back to Sulzberger Media? Huh?