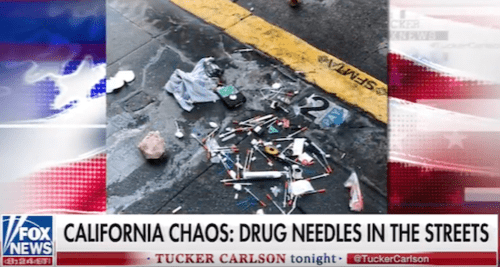 The city’s tourism industry has been pleading for a cleanup of the horrific conditions which is a reasonable request considering the traveller business brings in $9 billion annually. And now the first axe has fallen: a major medical convention that would have brought in $40 million has decided to pull out because of the danger to attendees. 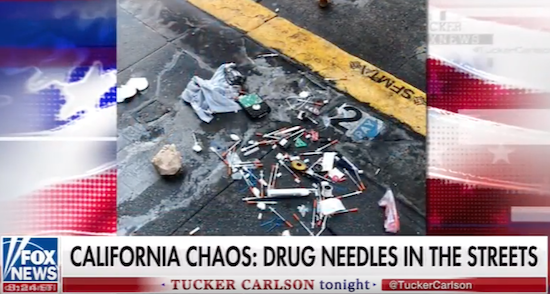 Tucker Carlson recently discussed the situation with congressional candidate Kimberlin Brown Pelzer. Interestingly, she brought up the influence of the notorious Prop. 47 which downgraded some non-violent crime from felonies to misdemeanors, which has resulted in an avalanche of theft, shoplifting etc. In cities like San Francisco, that means the police don’t even bother pursuing cases where the property loss is less than $950.

(Another crime that should not be forgotten was the murder of Marilyn Pharis by an illegal alien who had been released from jail because of Prop 47.)

KIMBERLIN BROWN PELZER: You know Prop 47, once that passed — and you could actually steal anything $950 dollars and below — that the homeless have been flocking to the state of California.

TUCKER CARLSON: That was the proposition, for our viewers who don’t follow it, that was proposition that made low-level crimes not crimes basically.

PELZER: Exactly, and I can tell you on a personal level, I have people coming into my stores on a regular basis, stealing items that my employees are later finding on Craigslist, and the police can’t do anything about it. They say they won’t show up because where do you send a ticket for someone who’s homeless? They simply don’t show up any longer, and they’ve made crime okay in the state of California and in San Francisco, where you’re talking about, I mean that’s Pelosi’s backyard and she is part of that liberal agenda that is driving California down. . .