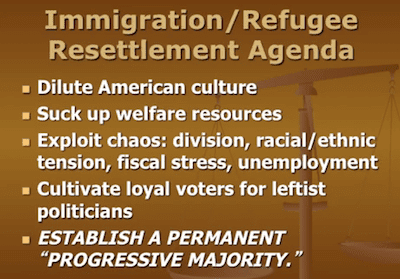 New Publication: How Immigration and Refugee Resettlement Are Used as a Weapon against America

Below is a five-minute video worth your attention, titled the Red-Green Axis: Refugees, Immigration and the Agenda to Erase America. It is from the Center for Security Policy and is a preview of a 65-page monograph of the same name.

The last 18 months of Obama’s term look to be filled with extreme actions of an unconstitutional nature like his unlawful amnesty, using his pen and his phone. The Republicans in Congress won’t stand up to him, and he knows it. So the period ahead is a dangerous time.

A PDF of the short book can also be read online: Red-Green Axis: Refugees, Immigration and the Agenda to Erase America.

Here’s the press release from Center for Security Policy:

Washington, D.C.: The Center for Security Policy today released a new paperback version of the monograph by investigative journalist James Simpson: The Red-Green Axis: Refugees, Immigration and the Agenda to Erase America. 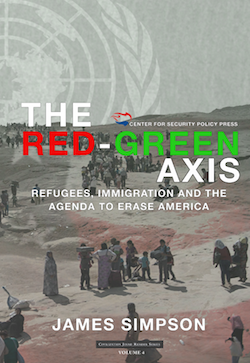 This report extensively details the networks of radical left non-profits, foundations, government agencies and the personalities behind them. Unbeknownst to most Americans they are using refugee resettlement as a pretext to import waves of immigrants from third-world nations as a key front in Obama’s strategy of “fundamentally transforming” America. These refugees have little interest in assimilating. Many are from Muslim countries, view immigration as “Hijra” i.e. a subversive means to invade a foreign nation, and have demonstrated a willingness to either support or engage in terrorism both in America and abroad.

These groups are coached by leftist non-profits to capitalize on our generous welfare programs and shown how to maneuver around legal impediments – all at our expense – but are not being taught how to assimilate. The report conservatively estimates welfare costs at $10 billion per year. Additionally, government resettlement contractors receive $1 billion annually in federal tax dollars and non-profits supporting the agenda are provided billions of dollars from non-profits like George Soros’ Open Society Institute.

The President has launched a “Welcoming America” initiative which seeks to “seed” refugees throughout our communities and weed out “pockets of resistance” with a full-throated effort vilifying anyone opposing his radical agenda. It is literally an offensive to erase American laws, traditions and culture, and replace them with a pliable, multi-cultural society that will vote the Left into the “permanent progressive majority” it seeks.

Jim Simpson has done a characteristically exacting investigation of the extent to which the red-green axis – the radical left, with its activists, contractors, philanthropies and friends in the Obama administration, and Islamic supremacists – have joined forces to use U.S. refugee resettlement programs as a prime means to achieve the ‘fundamental transformation’ of America. His expose is particularly timely against the backdrop of the government sponsored effort to ‘Welcome New Americans’ and suppress those who understand the imperative of “resisting” the migration to and colonization of this country, or hijra, that Shariah-adherent Muslim believed they are required to undertake.

The Center for Security Policy/Secure Freedom is proud to present Mr. Simpson’s monograph as a superb addition to its Civilization Jihad Reader Series.