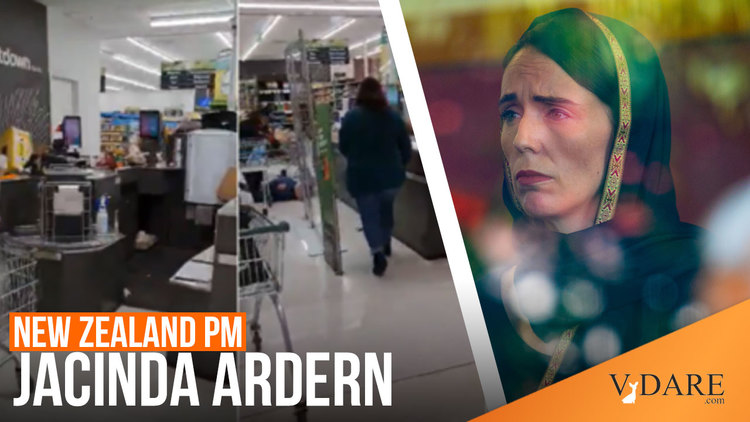 New Zealand Stabbing: Whether Muslims Are Victims Or Attackers, Jacinda Ardern Will Find Something Nice To Say About Them

Earlier, by Lance Welton: After Christchurch: Why Prime Minister Jacinda Ardern Was The Wrong Leader For New Zealand

A Sri Lankan Muslim immigrant to New Zealand attempted to commit Immigrant Mass Murder in Auckland. He didn't succeed in killing any of the unarmed New Zealanders (presumably white Christians) and was shot by an NZ police officer.

Authorities in New Zealand say they shot and killed an Islamic terrorist on Friday afternoon, within 60 seconds of when he started stabbing people at a supermarket.

Of the six people stabbed, three were in critical condition, one was serious and two were in moderate condition, according to outlet Stuff New Zealand.

The man, a Sri Lankan national [Note: This is one of the common evasions of the word "immigrant" in immigrant crime stories.], was a known ISIS supporter and was being followed around the clock, Prime Minister Jacinda Ardern said, identifying the incident as a terror attack.

You can see some video of it here:

What you need to know is that New Zealand 's female Prime Minister Jacinda Ardern made a statement exonerating Islam:

This is an emotional reaction, which is sort of what Ms. Ardern specializes in, as seen by her reaction to a previous terrorist attack in New Zealand.

"On the morning of the Christchurch Massacre,New Zealand was led by a lactating woman struggling with an episode of intense anxiety and depression, as well as deep and unresolved personal conflicts over religion, patriarchy and her sense of self." https://t.co/60Z1TkLxzj

Of course, the previous incident was a mass murder committed by a white person opposed to immigration from the "mass stabbing" and "terrorist" sections of the world to New Zealand, and there was none of this kind of "it's an individual, not a faith"  reaction.

Apparently the rule is that whether Muslims are attackers or victims, Jacinda Ardern will find something nice to say about them.