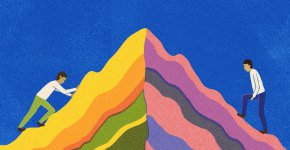 There are now, in a sense, two Asian Americas: one formed by five centuries of systemic racism, and another, more genteel version, constituted in the aftermath of the 1965 law. These two Asian Americas float over and under each other like tectonic plates, often clanging discordantly. So, while Chinese-Americans and Indian-Americans are among the most prosperous groups in the country, Korean-Americans, Vietnamese-Americans, and Filipino-Americans have lower median personal earnings than the general population. Over-all Chinese-American prosperity obscures the higher-than-average poverty rate for Chinese-Americans. In 2000, Asian-Americans were more likely to have college degrees than other adults in America, but also five times as likely as whites to have fewer than four years of education.