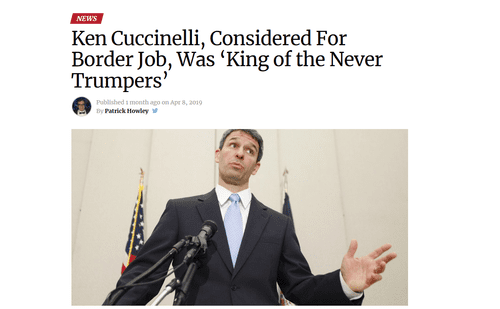 Never Trumper Cuccinelli Is Welcome In The White House. Kobach Apparently Is Not Welcome

Ken Cuccinelli is set to enter the administration while Kris Kobach remains on the outside.

It was reported Tuesday that Cuccinelli, who led the fight against Donald Trump’s nomination at the 2016 Republican National Convention, would be selected for an immigration role at the Department of Homeland Security. It was emphasized that the former Virginia attorney general would not be immigration czar. [Trump is expected to tap Ken Cuccinelli for top DHS role on immigration, by Kaitlan Collins and Jeremy Diamond, CNN, May 21, 2019]

Cuccinelli was picked because Trump watches him on TV and feels he thinks the same way as the commander-in-chief. Apparently, Trump forgot all about Cuccinelli’s actions in 2016. The expected new hire is not terrible on immigration, but it isn’t his main issue. As VDARE.com noted at the time, Cuccinelli completely ignored immigration when he ran for Virginia governor in 2013.

So why is he getting this job and not Kris Kobach? The answer may lie with Stephen Miller. Kobach’s demands for being selected immigration czar were released Monday in a likely attempt to scuttle his selection chances. None of the demands were unreasonable, however. They included requests to have unrestricted access to the president, be the face of immigration policy for the administration, a jet to quickly transport Kobach to the border, and a promise to eventually make him DHS secretary. [A Would-Be Trump Aide’s Demands: A Jet on Call, a Future Cabinet Post and More, by Maggie Haberman and Annie Karni, The New York Times, May 20, 2019]

The New York Times portrayed these demands as that of a prima donna who wanted too much. That’s just the message that Stephen Miller wanted, according to One America News’ Ryan Girdusky.

Kobach presented a threat to Miller’s desired role with his demands to be the face of immigration policy and have unrestricted access to the president. Kobach would become the number one immigration patriot if he joined the administration.

No one is better suited to run DHS or immigration policy than Kris Kobach. It would be a shame if he is blocked due to petty power politics. Unlike Cuccinelli, Kobach was a strong Trump supporter in 2016 and advised the campaign. Sadly, it seems supporting Trump in the Republican primary is a black mark when applying for a White House job.

There is still no permanent DHS secretary and Kobach may be selected for that role. But this week’s events cast doubt that that will occur.