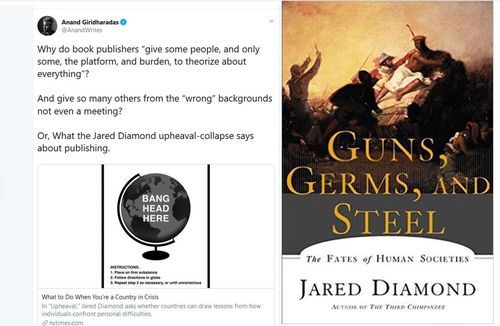 Jared Diamond's Real Flaw: He Believes Race Does Not Exist 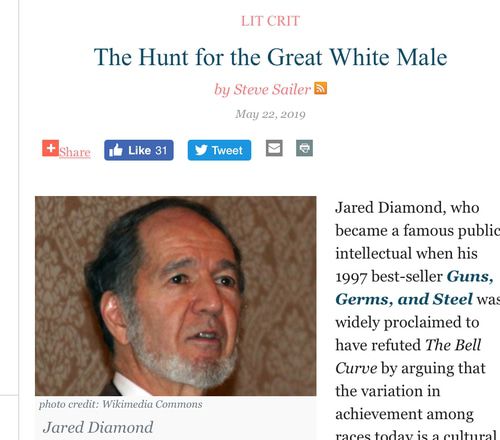 As Steve writes below, and at TakiMag, people are "coming for" Jared Diamond for being stale, pale, and male.

Anand Giridharadas wrote an article attacking Diamond's latest book, in a review, which both Alex Griswold and skeptic Michael Shermer insist is nothing more than nitpicking, however, they can't deny that Diamond is, in fact, an old white guy, and Giridharadas is not only younger than him, but a person of color.

Why do book publishers “give some people, and only some, the platform, and burden, to theorize about everything”?

And give so many others from the “wrong” backgrounds not even a meeting?

Or, What the Jared Diamond upheaval-collapse says about publishing. https://t.co/C56HgVfjag

Oh, and someone linked to this:

In case you haven’t seen it before, here’s an actual academic paper: https://t.co/baQZdnBZYZ

The fellow who wrote that, and I believe it may be peer-reviewed, is claiming that Diamond is a racist and an "environmental determinist", in both Guns, Germs, and Steel, and The World Until Yesterday.

If you read what we've had to say about Diamond's work [See 56 articles or posts from 2000 to today] you know he can't be both racist and environmental determinist.  What he is is a race denier.

He doesn't believe that there's any difference between the races of man as far as intellectual capacity is concerned. See particularly Jared Diamond: the New King of All Media, and Fads and Fallacies In The Name Of "Race Does Not Exist".

grew out of an attempt to answer "Yali’s question." Yali, a New Guinea native, allegedly asked Diamond, an evolutionary biologist, "Why is it that you white people developed so much cargo and brought it to New Guinea, but we black people had little cargo of our own?" "Cargo" refers to all that technology—airplanes, guns, steel axes—European whites brought to New Guinea, whose dark-skinned inhabitants were still using stone tools. Diamond’s answer, is that the peoples of the Eurasian continent were environmentally rather than biologically advantaged. They had the good fortune to have lived in centrally located homelands that were oriented along an east-west axis, thereby allowing ready diffusion of their abundant supply of domesticable animals, plants, and of cultural innovations.[More]

done something no responsible scientist should ever do: set out to explain a fact before making sure it is a fact. Asking why the continents came to differ in technology although “human neurobiology” is everywhere the same is like asking how canaries digest meat, or why Napoleon ended up in exile on St. Helena despite winning the battle of Waterloo. [Squaring The Circle, July, 1998]