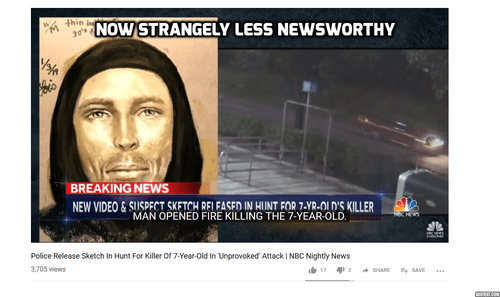 NBC's Coverage of the Handsome White Criminal...Who Turned Out To Be Black

The scorecard as of Saturday night:

There are about 18 minutes of News each evening. The white-murderer-black-victim aspect of this Texas drive-by shooting meant that it merited over 5% of available time for those 6 nights, making it about the fourth most important story, nationwide.

An update, in the wake of Sunday morning’s arrest of two black suspects:
* Sun. Jan 6 — no story
* Mon. Jan 7 — 1 min 15 sec story on the case of “mistaken identity”; no mention of race or black or white.

Imagine a world where employees of second-tier news organizations wouldn’t think for themselves, preferring instead to follow narratives set out by their social betters. I wonder what reporting in such a world would look like?