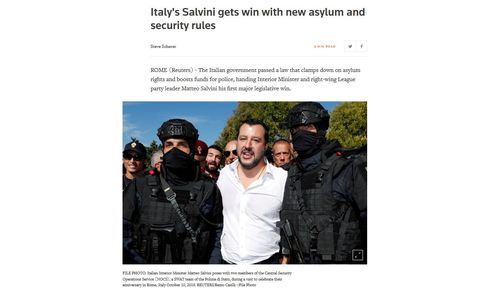 Once Again, Italy Shows The Way, This Time On UN Migration Pact And With New Asylum Laws

It looks like Italy will be the latest country to pull out of the UN migration pact, joining several others, including the United States.

Italy is joining a handful of countries and is bowing out of a conference next month to formally adopt a U.N.-backed pledge promoting safe migration.

Premier Giuseppe Conte, whose government has made headlines for its crackdown on migration, says that Italy will decide whether or not to support the deal after Parliament considers it.

In July, 192 countries unanimously agreed to the global pact to promote safe, orderly migration and reduce human smuggling and trafficking. At the time, only the U.S. abstained. But in recent months, a handful of countries have said they won't attend the meeting in Marrakech, Morocco, on Dec. 10-11 to formally approve the document, which isn't legally binding.

Since 2014, more than 640,000 migrants have arrived in Italy, most leaving Libya aboard smugglers' boats.

Italy continues to show the entire world how nationalist populism should be done. The Lega Party continues to grow in popularity as it doesn't just talk about expelling invaders, it does it.

The lower house of parliament voted 396 to 99 late on Wednesday to pass the law championed by Salvini, who took office in June in a coalition with the anti-establishment 5-Star Movement.

The new law eliminates humanitarian grounds for granting protection to refugees — asylum that is not tied to political persecution or war. It also funnels millions of euros to law enforcement and anti-mafia administrators.

Considering the current situation at the border and the laughable claims of "asylum," these kinds of reforms are exactly what President Trump should be pushing. The incredibly evil United Nations is wailing about the new law of course [UN condemns Italy's anti-migrant decree and 'climate of hatred,' The Local Italy, November 22, 2018] But actual Italians seem to approve. A new poll from Europe Elects shows the Lega Party (Salvini's party) consolidating its position as the country's most popular political grouping.

Italy is showing that nationalist populism, pursued intelligently, leads to a genuinely popular government that can actually build a sustainable majority. In short, Italy is doing what so many of us hoped President Trump was going to do.