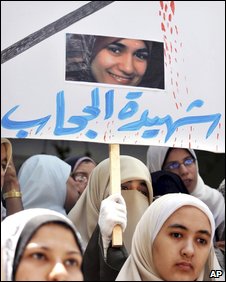 Crocodile tears are being shed along the Nile for a female member of the Egyptian tribe who was murdered in a German courtroom: Egypt mourns 'headscarf martyr' [BBC, July 6, 2009].

It was indeed a terrible crime: a pregnant Muslim woman was stabbed to death on the witness stand by a man who had called her a terrorist.

Interestingly, the attacker is described as a "Russian of German decent who immigrated to Germany in 2003." Diversity is everywhere.

But the shrieking in Egypt's rallies over the murder is a little overdone, considering the normal level of disrespect women get in Islamic societies. AP reported that "Thousands of Egyptian mourners marched behind the coffin of the 'martyr of the head scarf' on Monday".

Say, when was the last time that "thousands" of Muslims became irate about an Islamic female getting offed? When Muslim women are killed, it's usually Muslim men who are the perps, and that's okay. There were definitely men protesting; the photo here shows only women because rallies in Egypt are commonly gender segregated. (Curiously, a woman whose face is completely covered is holding an Islamically incorrect picture of victim Marwa Sherbini with her face showing.)

Of course, the mob of Muslim men howling up a storm were only upset at the perceived slight to Islam, not that a mere woman had been killed.

From the BBC article...

The body of a Muslim woman, killed in a German courtroom by a man convicted of insulting her religion, has been taken back to her native Egypt for burial.

Marwa Sherbini, 31, was stabbed 18 times by Axel W, who is now under arrest in Dresden for suspected murder.

Husband Elwi Okaz is also in a critical condition in hospital, after being injured as he tried to save his wife.

Ms Sherbini had sued her killer after he called her a "terrorist" because of her headscarf.

The case has attracted much attention in Egypt and the Muslim world.

German prosecutors have said the 28-year-old attacker, identified only as Axel W, was driven by a deep hatred of foreigners and Muslims.

Funny, there have been around 50 honor killings in Germany since 1996 with no concern from the Muslim world about those women murder victims. I don't recall any outrage when Hatin Surucu was killed by her brother because she "lived like a German," meaning as a free individual rather than a doormat of Allah.

Another victim was Morsal Obeidi, 16, stabbed 20 times by her brother who resented her easy assimilation to western life. No anger from the ummah about her cold-blooded murder either. Apparently there is an inverse relationship with distance and the value of a female life.

This brouhaha could turn into a new cartoon jihad episode: The headscarf martyr: murder in German court sparks Egyptian fury.

She has become a national symbol of persecution for a growing number of demonstrators, who have taken to the streets in protest at the perceived growth in Islamophobia in the west. Sherbini's funeral took place in her native Alexandria on Monday in the presence of thousands of mourners and leading government figures. There are plans to name a street after her. [...]

Angry mourners at the funeral in Alexandria accused Germany of racism, shouting slogans such as "Germans are the enemies of God" and Egypt's head mufti Muhammad Sayyid Tantawy called on the German judiciary to severely punish Alex W.

The Egyptian mob men are trying to portray Muslims as the victim. Certainly a Muslim woman was killed in an outrageous manner, but nobody should be surprised that Europeans are angry (a few murderously so it appears) about mass Muslim immigration. The presence of hostile Muslim immigrants in Europe has led to numerous murders and terrorism.

One terrorist act that comes to mind is the 2005 London public transport attacks where 52 people were killed by four Muslim suicide bombers. July 7 is the fourth anniversary of that terrible event, and a memorial was dedicated in Hyde Park.