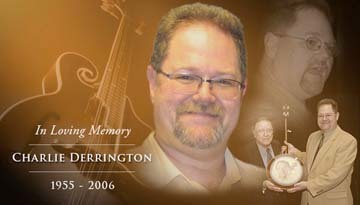 Above is the remembrance from the Gibson Guitar Corp. of its late employee, Charlie Derrington, who was killed August 1 in Nashville. His motorcycle was struck head on by a Ford Explorer in the wrong lane driven by a previously deported illegal alien, Julio Villasana, who was drunk and tried to escape the crime scene.

Charlie Derrington was a well known figure in the bluegrass music scene, particularly for his love of the mandolin and his ability in instrument construction and restoration, as well as musicianship. Watch a brief YouTube clip of Charlie playing some fine bluegrass licks on a beautiful Loar mandolin.

Charlie was something of a legend for repairing Bill Monroe's mandolin after it had been smashed by a vandal, a restoration miracle (see before and after photos) which brought tears to Monroe's eyes. The instrument is now displayed in the Country Music Hall of Fame.

The message board at Mandolin Cafe has posted more than 200 remembrances from friends and people who knew Charlie Derrington from reputation only. His tragic death is a terrible loss to the traditional music community as well as to his wife Susan and daughter Anna.

Despite the pain of so many, The Tennessean had the gall to write a deeply inappropriate column on Saturday titled, Focus effort on DUI offense: Tragedy caused by drunken driving, not illegal immigration.

If a citizen is killed by a drunken driver, that person's fate doesn't hinge on whether the driver was legal or illegal. It certainly is related to whether a driver was drunk.

The Tennesean is denying the basics of causality: if a foreigner is not illegally present in the United States, then drunk or sober, he cannot kill innocent Americans, like Charlie Derrington.