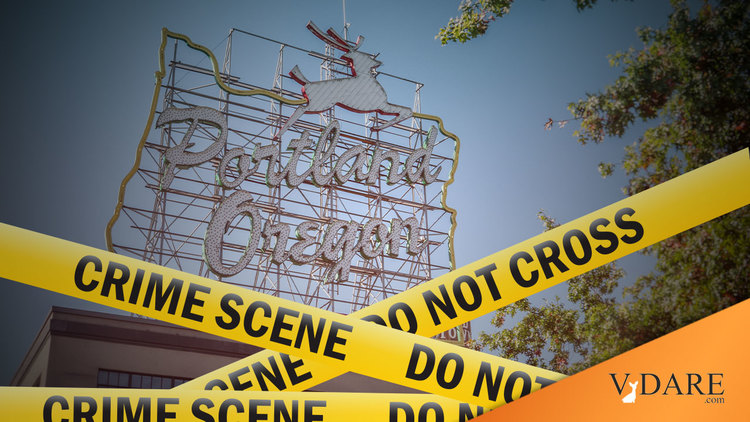 Murder Has Quintupled In Portland

PORTLAND, Ore. — … Portland is a White city, overwhelmingly so — African Americans account for just 6 percent of the population. But it is Black people such as Yoakum, an aspiring union electrician, who are dying at near-historic rates and filling churches with grief.

On May 12, Yoakum, a father of two young boys, became the city’s 30th homicide victim this year. That is five times more than were recorded during the same period in 2020, a frightening pace that could see more slayings here by the end of the year than in the past four decades.

This was not how the year following George Floyd’s murder was supposed to end, not with Bishop Garry Tyson, of the General Baptist Convention of the Northwest, telling mourners that “Jalon didn’t die. He was killed. His life was taken.”

After months of social-justice activism that made Portland a vivid, sometimes violent focal point for a nation debating the same issues around police accountability and reform, the movement here has splintered into bickering groups, at odds over tactics, goals and an overall direction for how to make the city safer, with the police force still at the debate’s bitter center.

The sharpening conflict between rising violent crime and efforts to reduce the size of police departments has played out across the American West throughout this pandemic year. Now cities such as Portland, considered among the most ambitious in moving to reshape its police force, have retrenched. So have Oakland, Calif.; Berkeley, Calif.; Los Angeles and several other influential cities on the issue.

The nightly confrontations with police and federal agents deployed here by President Donald Trump have been replaced by a kind of generational hopelessness, a tenuous sense of security across an under-policed city and a return to an old-school style of gun violence reminiscent of a tit-for-tat cycle of deadly reprisals, almost always among young men of color. Through April, the police reported 348 shootings, more than double those recorded over the first four months of last year.

A city of about 650,000 people, Portland has long experienced the push and pull of its stridently felt politics. By many measures, particularly on social issues such as marijuana legalization, the environment and gay rights, the city has been at the vanguard.

But there has also been a historical strain of violent independence in some of its residents, a trait that has helped small groups of self-described anarchists overwhelm the year-old push for police reform and social justice.

The word “Antifa” doesn’t appear in this article. It appears a recent ploy is to rechristen Antifa as “anarchists.” See, anti-fascists are A) A paranoid delusion of Trump-infected minds, and B) Good. But anarchists are A) Real and B) Trouble. (Also, “anarchists” sound like they might be rightwingers into Ayn Rand and Rand Paul, which is Good, because it’s important to keep stupid white people confused about who is causing the trouble.)

From the assessments of the White mayor, Ted Wheeler, and the Black police chief, Chuck Lovell, this smaller faction comprises mostly White, middle-class students and others, who have made places such as churches, public libraries, small Black-owned businesses and a Boys & Girls Club the confounding targets of their vandalism.

Last Tuesday, police declared a riot when one of two groups that had gathered to mark the anniversary of Floyd’s murder broke windows, set fires and threw objects at police. Five people were arrested; all were White.

Portland’s once-vibrant downtown, the heart of a world-class food scene, is still marred by boarded-up windows and closed businesses, the aftermath of a year of pandemic and fear of random assault and vandalism often committed under the name of the police reform movement.

But who can focus on the losses there when there is so much late-breaking 1921 Tulsa riot news to cover?

“You have more and more African American leaders coming out to say that this is not helpful,” said Kris R. Henning, a professor of criminology and criminal justice at Portland State University. “But when you look over the longer history of what’s been going on in Portland — there’s something else happening. It’s not just the protests. It is not just covid-19. There is something else going on in Portland.”

A simple explanation is that while Portland has few black people, they got as worked up over the Racial Reckoning as blacks elsewhere in the U.S. with the usual homicidal black-on-black consequences. But Portland also has a remarkable number of leftist and crazy leftist white people, such as its numerous transgender rioters, many of whom were probably brought to Portland by Oregon’s law subsidizing transgender treatments.

Henning and others say crime was rising in the city before the pandemic shut it down and before Floyd died in Minneapolis with a White police officer’s knee on his neck.

Actually, the big surge in murder in Portland happened during the Racial Reckoning and Mostly Peaceful Protests: From 2019 to 2020, the number of homicides nearly doubled, something Henning called “unheard of” in Portland. This followed years with some of the nation’s lowest crime rates for a city its size.

“So these perpetrators, my guess, were coming of age, were in elementary and middle school right around the Great Recession,” said Brian Renauer, director of the Criminal Justice Policy Research Institute at Portland State. “Now they’re in their early to mid-20s. So what we’re seeing is the outgrowth of a breakdown in the family, in the economy, in those neighborhoods they came out of, if this is very much a homegrown phenomenon.”

Nah, it was the saintly Racial Reckoning.

The rising gun violence, and for a time the downtown demonstrations, have stressed the police department and put it largely on its back foot, a response unit rather than a force with resources to prevent crime. As one measure, police response time to emergency calls has more than doubled over the past eight years, to more than 40 minutes of wait-time before a call is even fielded by emergency dispatchers.

“Police are bailing,” Henning said. “We are losing our best, most experienced officers left and right, and calls for service are increasing every year.”

The Portland Police Bureau is authorized to have 1,001 sworn officers. At the moment it has about 900, a shortage that city officials blame on a lack of urgency in hiring and police leaders attribute to a lack of support and funding.

Lovell, the police chief, who took office in the hot early days of the demonstrations in June 2020, said more than 120 sworn officers have left the department in the past nine months.

The city council last year cut about $27 million from the roughly $200 million police budget — about $11 million because of a pandemic-caused budget crisis, and $15 million as part of the “defund” effort to shift some police resources to other agencies that may be able to handle nonviolent calls more effectively. …

“What I know is that being chief, and being a Black chief in particular, this movement to really exclude police from some facets of enforcement or community interaction, it really bears the brunt on the African American community,” Lovell said. “These shootings have an outsized impact on people of color.”

The chief’s goal to reestablish a larger uniformed presence on Portland’s streets and in its most dangerous neighborhoods appears to be supported by many residents, who just a year ago were very much opposed to the city’s police practices.

Some of those practices have changed — in particular, mass arrests during demonstrations have eased — but the confrontations have persisted.

A poll conducted by the Oregonian newspaper this month found that three-quarters of Portland-area residents did not want police officer levels to decline more than they have. Just more than half said they favored an increase in the number of officers. …

Most pressing were the 550 cases related to the protests that prosecutors hadn’t yet engaged during the rapid transition in the DA’s office. Nearly all involved first-time offenders charged with interfering with a police officer, which usually carries a public-service penalty but also results in a record.

Schmidt, who interned in the same DA’s office years earlier, did not see a public safety benefit in taking the cases to court, a move that he said would “simply throw fuel on the fire” of public sentiment against law enforcement. Only those charged with serious property crimes, among other major offenses, would be prosecuted. …

But Schmidt, who was elected with 77 percent of the vote, said the “message I was sending got twisted,” and the public began to think that no cases associated with protests would be prosecuted. Vandalism and property crimes spiked — and at a time of rising violence against [and by] young men of color, Schmidt was making the rounds to explain that people who broke windows and burned buildings would be prosecuted. …

Wheeler, the mayor, said he believes that the city has begun to recover, at least from the demonstrations that have left downtown largely empty on most days. Over the past year, he said, the city has recorded an 85 percent decline in downtown foot traffic. The result has been economic despair and more crime.

It’s almost as if urban life requires a lot of policing. If you want to defund the police, then the suburbs are more attractive.