"Name That Party"—the phenomenon of a corrupt Democratic politician being reported in the press without his party being mentioned—is sort of the "Not Reporting Race" of mainstream conservatives.

Both phenomena stem from the same fact—the MSM is monolithically liberal Democrat—but some mainstream conservatives and libertarians don't want to report race either.

Recently the NYT did a story on Robert Menendez (D-NJ) being the first Senator since Abscam in the eighties to face federal bribery charges, without mentioning his party.

After this was pointed out—by KellyAnne Conway, among others, a brief reference to the Democratic Party was "stealth-edited" into the fifth paragraph:

Liberals who didn't believe this, like the guy at right, just don't realize that the NYT stealth-edits (with no note saying "CORRECTION") because it doesn't affect him.

But what about this corrupt Northeastern United States Hispanic Senator's race? I'll mention that—he's white. Unlike most New Jersey Hispanics, who tend to be from Puerto Rico, he's a Cuban, born in New York to economic migrants, not refugees. Wikipedia says "Robert Menendez (later usually known as "Bob"), was born on January 1, 1954 in New York City, to Cuban immigrants who had left Cuba a few months earlier, in

late 1953. His father, Mario Menéndez, was a carpenter, and his mother, Evangelina, a seamstress."

His photograph, right, shows a guy who looks about as white as Jeff Sessions.

His status as a white Conquistador-American is mentioned in these two VDARE.com blog items:

His various scandals, mostly reported by Michelle Malkin, and involving bribery, immigration favoritism, and (allegedly) underage hookers are below—the two girls aren't underage, they're women who got visas ahead of the queue. Finally, of course, Menendez was one of the two Latino members of the 2013  bipartisan  "Gang Of Eight" that tried to force Amnesty through, the other being the even whiter Republican, Marco Rubio. 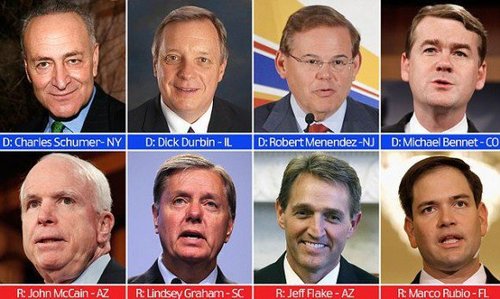 It's a peculiarity of modern identity politics—because Mexicans decided they wanted to be known as Hispanic, pundits are either reluctant to say, or don't understand, that a man with a "z" on the end his name can be white.