One might think that a prudent public official with an important job like Senator would normally do a background check of all persons working in his office. Apparently Senator Bob Menendez (D-NJ) didn’t, and as a result welcomed an illegal alien who was also a sex-offender to volunteer in his Washington office.

What’s notable in this case is how the DHS was told not to arrest and deport the guy until after the election, where Menendez was running for another term. The intern was arrested on December 6, which was reported a few days later, but the administration tut-tutted away any suggestion that there was a political delay.

The perp is question is Luis Abrahan Sanchez Zavaleta, a Peruvian visa overstayer who was arrested for numerous sexual assaults on an eight-year-old boy.

Senator Menendez is on the Foreign Relations Committee, which has national security functions, so checking everyone’s identity in his office seems a no-brainer.

Photos of the perp haven’t appeared in the American media, but the Spanish-speaking press has been more forthcoming: 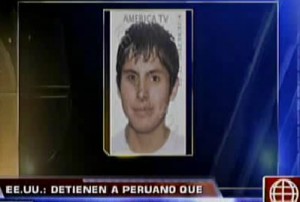 The following report notes that Zavaleta was arrested and then released, presumably to show up for deportation at a later date. Or will be amnestied under Obama’s DREAMer free-for-all for which he applied? Is child molestation a serious enough crime to warrant deportation under Democrat values? We will see, if the media will diligently follow up on the case.

WASHINGTON — Federal immigration agents were prepared to arrest an illegal immigrant and registered sex offender days before the November elections but were ordered by Washington to hold off after officials warned of “significant interest” from Congress and news organizations because the suspect was a volunteer intern for Sen. Robert Menendez, according to internal agency documents provided to Congress.

Sanchez, 18, was an immigrant from Peru who has overstayed a visitor visa that allowed him to enter the United States. He eventually was arrested at his home in New Jersey on Dec. 6. He has since been released from an immigration jail and is facing deportation. Sanchez has declined to speak to the AP.

After the AP story, which cited an unnamed U.S. official involved in the case, Sen. Charles Grassley of Iowa and six other Republicans on the Senate Judiciary Committee asked the Obama administration for details about the incident.

According to those documents, U.S. Immigration and Customs Enforcement agents in Newark had arranged to arrest Sanchez at the local prosecutor’s office on Oct. 25. That was fewer than two weeks before the election.

Noting that Sanchez was a volunteer in Menendez’s Senate office, ICE officials in New Jersey advised that the arrest “had the possibility of garnering significant congressional and media interest” and were “advised to postpone the arrest” until officials in Washington gave approval. The documents describe a conference call between officials Washington and New Jersey to “determine a way forward, given the potential sensitivities surrounding the case.”

The senators, in a letter to the Homeland Security Department, said the agency documents showed that Sanchez’s arrest “was delayed by six weeks,” as AP had reported. They asked for details about the department’s review of potentially sensitive, high profile immigration cases when arrests are delayed.

In a letter Monday, Assistant DHS Secretary Nelson Peacock said an allegation that the government delayed Sanchez’s arrest “for political purposes” was categorically false. Neither the unnamed U.S. official cited in AP’s original story or the senators in their letters to the department had specifically alleged that the arrest had been delayed for political purposes. The official, who spoke on condition of anonymity because this person was not authorized to discuss details of Sanchez’s immigration case, told AP last month that the department had instructed federal agents not to arrest Sanchez until after Election Day.

The documents provided to Congress do not indicate why the arrest should have been delayed or whether anyone outside Immigration and Customs Enforcement – such as in the headquarters offices of the Homeland Security Department – was consulted.

Menendez, D-N.J., who advocates aggressively for pro-immigration policies, was re-elected on Nov. 6 with 58 percent of the vote. Menendez said last month that his staff was notified about the case immediately before AP’s story, he learned about the case from the AP and he knew nothing about whether or why DHS had delayed the arrest.

According to police records, Sanchez was 15 when he was arrested on a charge of aggravated sexual assault in 2009. The records show he was accused of sexually assaulting an 8-year-old boy at least eight times and sentenced to two years’ probation and required to register as a sex offender. The AP is not reporting the boy’s relationship to Sanchez to avoid identifying the victim.

The agency documents show that Sanchez failed to update his sex offender registration, and local prosecutors considered arresting him for that. During the same time, immigration officials learned that Sanchez had applied for the Obama administration’s Deferred Action for Childhood Arrivals program, which would have allowed him to stay in the country and legally work for two years. He did not disclose his arrest or status as a sex offender on the application and was eventually denied, according to the documents.

Immigration enforcement operations in New Jersey were largely halted starting Oct. 28 as officials prepared for Hurricane Sandy. By Nov. 29, ICE had planned to arrest Sanchez after Citizenship and Immigration Services had formally denied his deferred action application. The following day, the ICE Office of the Principal Legal Advisor was consulted. The agency’s chief counsel was also consulted and the arrest was approved Dec. 5.

Sanchez was arrested the next day.

During the final weeks of President George W. Bush’s administration, ICE was criticized for delaying the arrest of President Barack Obama’s aunt, who had ignored an immigration judge’s order to leave the country several years earlier after her asylum claim was denied. She subsequently won the right to stay in the United States after an earlier deportation order, and there was no evidence of involvement by the White House.

In that case, the Homeland Security Department had imposed an unusual directive days before the 2008 election requiring high-level approval before federal agents nationwide could arrest fugitive immigrants including Zeituni Onyango, the half-sister of Obama’s late father. The directive from ICE expressed concerns about “negative media or congressional interest,” according to a copy of that directive obtained by AP. The department lifted the immigration order weeks later.